The long-awaited Samsung Galaxy S3 Android 4.2 Jelly Bean update leaked several days ago bringing a pre-release piece of software to those that wish to install it early while also confirming some of the Samsung Galaxy S4 software features that will be coming along with the firmware once Samsung decides to roll it out, now said to be sometime in July or August.

Earlier this month, we heard that the Samsung Galaxy S3 Android 4.2 update would be rolling out sometime in the third quarter of this year along with the Galaxy Note 2 Android 4.2 update. Both updates were originally thought to be rolling out in May or June though that timing appears to have been pushed back so that Samsung can complete further testing on TouchWiz. 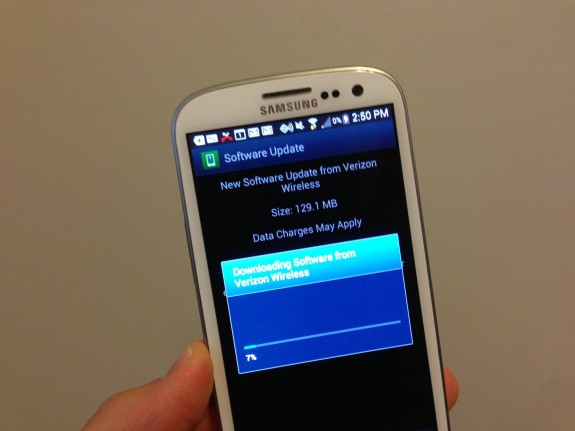 The Samsung Galaxy S3 Android 4.2 update should roll out in July or August.

SamMobile leaked the Galaxy S3 Android 4.2.2 update several days ago, though the software is a pre-release version of the software, meaning, it’s not finalized. That means that Galaxy S3 owners will need to be serious about wanting the software as it likely isn’t going to be the version that is released to the public. It also means that there will likely be bugs on board.

It appears that the update does indeed have Galaxy S4 features on board, as was announced by Samsung, and right now they appear to be the new lockscreen, the new camera features, new S-Voice, and new Voice controls. The update is going to be a sizable one, both pre-release and official, and it should have Galaxy S3 owners excited as it’s likely going to freshen up a phone that was released all the way back in June of last year.

Carriers in the United States will more than likely be behind the curve when it comes to a release date, as they always are, though Sprint has proven to be getting faster when it comes to pushing out major Android software updates to its stable of devices.

Look for the first U.S. Galaxy S3 Android 4.2 updates to roll out several weeks after the software first arrives.