Many believed that the Galaxy S3, one of the most popular devices in the world, would be among the first to Android 4.2. As we found out, that wasn’t to be the case. Rumors suggested that Samsung was having problems with Android 4.2 and that it might skip the update in favor of Android 4.3 Jelly Bean, an update that debuted in July of last year.

As it turned out, rumors were spot on because the Galaxy S3 did not receive Android 4.2 and made the jump straight to Android 4.3. While the wait was long, Android 4.3 brought a number of big time features to the table. Android 4.3 Jelly Bean continues to land for the Galaxy S3 but it does so with another Android update looming in the distance.

Earlier this year, Samsung confirmed the Galaxy S3 Android 4.4 KitKat update for arrival. However, the company was careful not to confirm it for everyone. The first announcement came from Samsung USA and the other announcements came from Samsung Poland and a U.S. carrier. As time has gone on, we’ve started to hear more and more about Samsung’s supposed plans and for many, it’s not looking pretty.

With that in mind, we want to take an updated look at everything we know about the upcoming Samsung Galaxy S3 Android 4.4 KitKat update, an update that from the look of things, may not make it to everyone.

This week, we’ve seen carriers update their Android deployment schedules. Vodafone Australia, SFR in France, Optus in Australia, just to name a few of the carriers that like to keep their customers in the loop. While we haven’t seen a ton of movement overall, we also haven’t seen any carriers confirm upcoming Galaxy S3 Android 4.4 KitKat updates.

Maybe the most glaring absence is SFR’s. The French carrier releases a monthly Android update schedule that clues its users in on its plans for the upcoming month and beyond. SFR lists a number of updates on its schedule for April including an Android 4.4 KitKat update for the Samsung Galaxy Note 2.

It’s surprising given that we’ve seen a number of Galaxy Note 2 Android 4.4 confirmations but it’s not the end of the world at this point. We imagine that things are still being sorted and carriers will deliver information when they’re ready. Still, it’s not an encouraging sign.

It’s not encouraging because all signs, up to this point, suggest that the Galaxy S3 Android 4.4 KitKat update may be limited to the 2GB Galaxy S3 LTE model. And yes, Sprint’s version of the Galaxy S3 is the LTE model that runs 2GB.

Weeks ago, we saw Samsung Poland tell its customers that it would not be upgrading the 1GB version of the Galaxy S3 to Android 4.4 KitKat. And this week, a very credible source threw his weight behind that information with some new details.

Until Samsung says something, there is still a chance that the 1GB Galaxy S3 could get Android 4.4. Things just aren’t looking very good at the moment. At this point, Galaxy S3 owners who use the 1GB model would be wise to start tempering expectations.

All along the Samsung Galaxy S3 Android 4.4 KitKat update has been rumored for April or May. We’ve seen that time frame rumored numerous times and we saw it emerge once again earlier this week. A report out of Korea, citing a Samsung customer service representative, suggests that the Galaxy S3 roll out could be close.

With the Galaxy Note 3 and Galaxy S4 Android 4.4 KitKat updates clearly winding down and Samsung’s confirmation now extremely old news, we have to be getting closer. 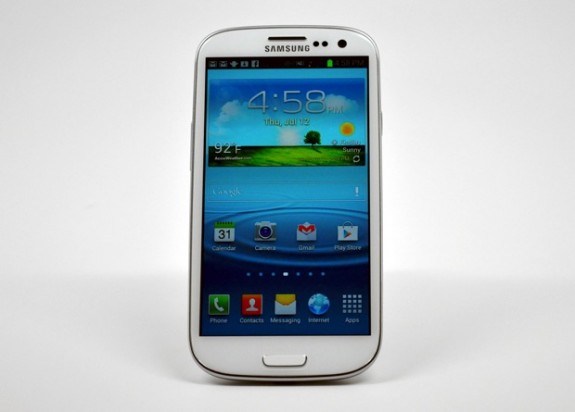 Keep in mind, not all Galaxy S3 Android 4.4 KitKat update release dates are going to be equal. While a carrier in Korea or a carrier like Sprint might roll out its update right off the bat, there are going to be some other carriers that are far off in the distance.

In other words, it could be several weeks before Vodafone is able to push out Android 4.3. Android 4.3 Jelly Bean completed its roll out in the United States all the way back in December of last year.