Those suspicions were confirmed last week, at least for the Samsung Galaxy S4, as Samsung began the Android 4.3 roll out for the Galaxy S4. The update, which hasn’t yet rolled out in the United States, brings a number of upgrades to the table including support for the Galaxy Gear. While it has been assumed that the Galaxy Note 2 and Galaxy S3 updates are next, Samsung hasn’t said anything. Thanks to a Galaxy Gear manual and Telstra Australia though, we now know the Android 4.3 updates are on their way.

Future SW updates for Samsung devices “Galaxy S3”, “Galaxy S4” and “Galaxy Note 2” based on releases of SW Android OS 4.3 will be compatible with Galaxy Gear.

If that wasn’t enough confirmation, Telstra has released its brand new update timeline that provides its customers with information about upcoming updates. In the new time line, Telstra confirms its intention to update the Galaxy Note 2 to Android 4.3. The company states that it will be updating them both sometime during the month of November. 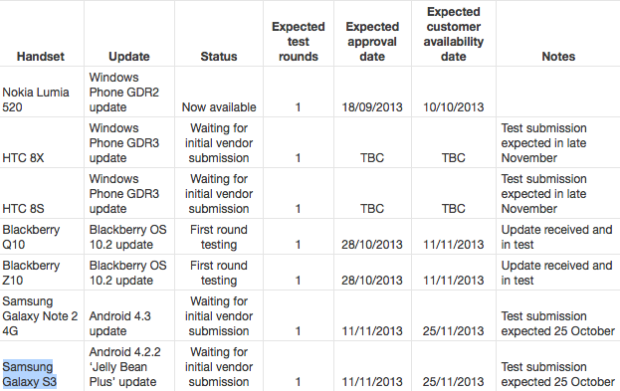 Oddly enough, it says that the Galaxy S3 will be getting Android 4.2.2 first. Both the Galaxy S3 and Galaxy Note 2 Android 4.3 Jelly Bean updates have been rumored for arrival in November.