The Samsung Galaxy S3 Android 4.1.1 Jelly Bean update is currently rolling out to owners of the device in Canada and it appears that the update is also available through Samsung’s Kies application for those that don’t wish to wait.

Several owners of Canadian version of the Galaxy S3 have informed Gotta Be Mobile that the Android 4.1.1 Jelly Bean update is now available through an Over-the-Air update and through Samsung Kies. Samsung Galaxy S3 variants on Bell, TELUS, Virgin and Rogers are all saying that the software has become available tonight, as Samsung promised last week.

Samsung said that the update would start rolling out Monday and the company was indeed able to keep that promise. We’ve heard from several owners who got the OTA update only to encounter issues. It appears that updating through Samsung Kies is working for most users so if the OTA update causes problems, Samsung Kies is likely the route that owners will want to take. 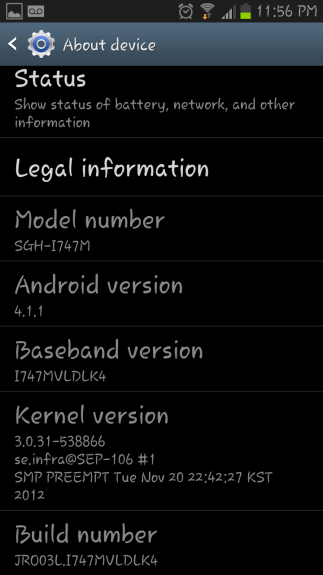 The Galaxy S3 just got Android 4.1 Jelly Bean. In Canada.

The update is a massive one, checking in at over 300MB in size, which means Galaxy S3 owners need to set aside some time to both download and install the Android 4.1.1 Jelly Bean update.

Now that the update has rolled out in Canada, the next in line for the update should be AT&T, U.S. Cellular and Verizon in the U.S. which have yet to roll out Android 4.1 Jelly Bean for their devices. Sprint and T-Mobile already delivered Jelly Bean to their Galaxy S3 devices.

Thank you Sean and everyone else that sent this in!