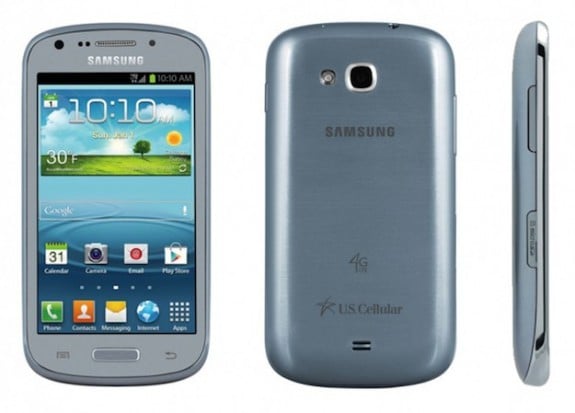 The Galaxy Axiom becomes the first U.S. Galaxy S3 Mini to get Android 4.1.

Today, U.S. Cellular’s version of the device, the Samsung Galaxy Axiom, received its upgrade to Android 4.1 Jelly Bean that has begun hitting users Over-the-Air in the form of Android 4.1.2 Jelly Bean, the same version of Android that variants of the Galaxy S3 are on in the United States. Like those updates, this update does not bring the Premium Suite of applications from Samsung.

What it does bring though are the long list of Android 4.1 enhancements that should make for a much better experience on U.S. Cellular’s version of the Galaxy S3 Mini.

Android 4.1 Jelly Bean is a massive upgrade as it brings not only a new, smoother user interface to the table, but it also brings Google Now, an improved stock Browser, better Calendar application, better widgets and multitasking and more. All in all, it’s a massive upgrade over Android 4.0 and one that users should think about installing.

Those Galaxy Axiom owners who are indeed interested in installing the update will want to head into the device’s settings to check for the update. The device will need to be connected to a Wi-Fi network in order to proceed as the software is going to be a fairly sizable update.  After the update prompts, it will download and the installation process will begin.

After, the Galaxy Axiom will restart and the device will be running Google’s older version of Android which was replaced by Android 4.2 Jelly Bean back in November of last year.

It’s unclear if the Galaxy Axiom will get support beyond Android 4.1 but as of now, there is a chance.