The Samsung Galaxy S3 Mini already comes in a few different colors but it appears as though Samsung will be adding to its tally as three new Galaxy S3 Mini colors have appeared on camera.

Right now, the Galaxy S3 Mini comes in Pebble Blue and Marble White. However, for those looking for something different, it appears that Samsung may be introducing three more colors to the fold at some point in the near future, potentially at Mobile World Congress 2013. 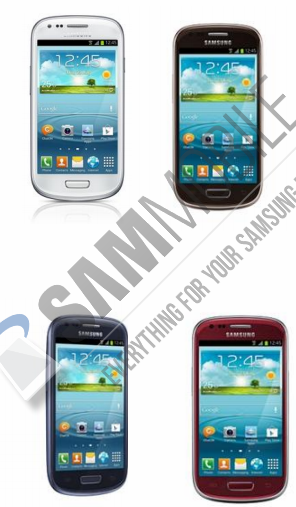 The Galaxy S3 Mini has emerged in three new colors.

A new image, unearthed by SamMobile, depicts three new colored Galaxy S3 Mini models. The three new colors that are shown include Titan Gray, Garnet Red and Onyx Black, all of which have yet to be announced. Samsung still has not confirmed the three colors, so there is a chance that we may never see them come to light, but given that Samsung will almost certainly be introducing new colors for the Galaxy Note 2, it would be surprising not to see the Galaxy S3 Mini emerge with some new colors in the future.

Again, a likely spot for an announcement is Mobile World Congress which is set to take place in Barcelona at the end of February. It’s the same event that Samsung is heavily rumored to be introducing a new Galaxy S4 smartphone and quite possibly, debuting some new color options for its Galaxy Note 2 and Galaxy S3 Mini.

The Galaxy S3 Mini of course is exactly what it sounds like, a miniature version of the Galaxy S3. It features a 4″ Super AMOLED display with 480 x 800 resolution, a 5 megapixel camera, a speedy dual-core processor, as well as Android 4.1 Jelly Bean out of the box.

As of yet, the Galaxy S3 Mini is unavailable on a carrier in the United States and at this point, it seems unlikely that a carrier would pick it up with the Galaxy S4 likely on the way in the first half of the year.