The company made the announcement today just over 150 days since the Samsung Galaxy S3 was released at the end of May and in June in the United States. The 30 million in sales for the Galaxy S3 is a new record for Samsung.

Samsung put the sales into perspective saying that the device sells once every 0.45 seconds, would fill up the surface area of 12 Roman Coliseums, the weight of 100 humpback whales, and if stack horizontally, would be equal in height to 29 Mt. Everests. 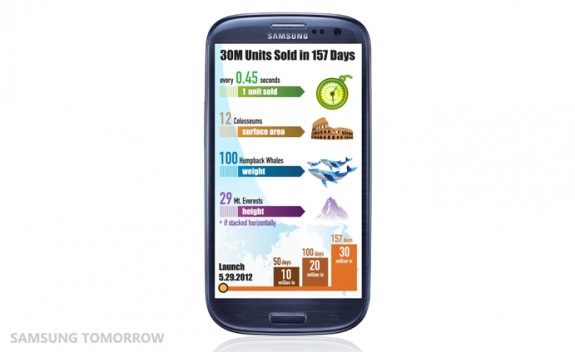 The Galaxy S3 has surpassed the 30 million in sales mark.

The sales shouldn’t see any kind of a slow down either given the approaching holiday shopping season, the deep discounts on the Galaxy S3 price,and the fact that the device is now receiving its Android 4.1 Jelly Bean update.

Thus far, the Sprint Galaxy S3 is the only device that has received the Android 4.1 Jelly Bean update, up from Android 4.0 Ice Cream Sandwich, but the other Galaxy S3 devices on AT&T, T-Mobile, Verizon and U.S. Cellular should follow in the weeks ahead. The update will only make the Galaxy S3 a more attractive device. The device will likely be receiving the Android 4.2 Jelly Bean update as well, Google’s latest version of Android.

Android 4.2 for the Galaxy S3 is rumored to be rolling out sometime in the first quarter of 2013 though no specific date is known and Samsung has yet to confirm the roll out schedule for the update.

In comparison, the iPhone 5, Apple’s latest smartphone, sold five million in its first weekend and will likely be the Galaxy S3’s biggest competitor for the hearts, minds and money of consumers this holiday season.