French carrier SFR has released its update schedule for January and surprisingly, the Samsung Galaxy S4 and Galaxy Note 3 Android 4.4 KitKat updates that the carrier said could be arriving in late January, are nowhere to be found meaning the release dates are now completely up in the air.

SFR’s information did, however, fit in with a leak that suggested that Samsung was aiming for a release in January. SFR claimed that the updates would be rolling out in late January or early February. So, like many SFR owners, we were waiting in anticipation for the carrier’s January update schedule to get released. The carrier is one of only a few that is extremely forthcoming about Android updates. 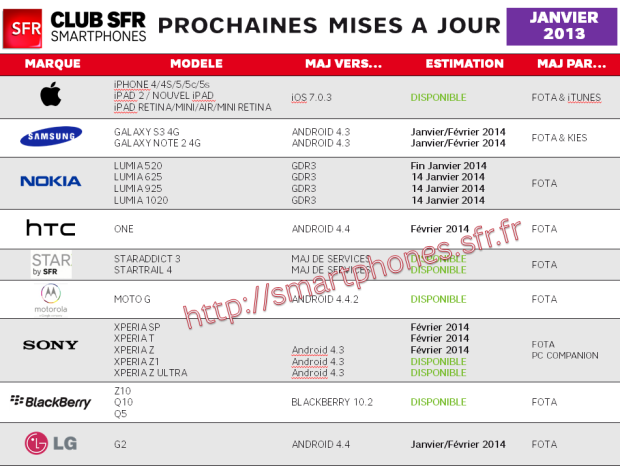 At the moment, it’s not clear why the updates failed to show up on the schedule. We have reached out to SFR but thus far, we have not heard back from company representatives.

It’s entirely possible that the carrier won’t be able to keep its promise, we’ve seen it run into trouble before, and it’s possible that they simply aren’t planned for January and will roll out in February instead. It’s also possible that Samsung intervened and made them take down the information. What’s interesting is that there are updates on there that are given release dates for January or February rather than January alone. This is all speculation at this point and again, it’s not clear how the carrier will proceed.

What it doesn’t mean though is that these updates won’t be coming. In fact, we could see an Android 4.4 KitKat update for the Galaxy S4 leak tomorrow.