New purported benchmarks of the Samsung Galaxy S4, and in particular, the alleged Korean Galaxy S4 with model number SHV-E300S, have emerged today showcasing Android 4.2 Jelly Bean, Google’s latest version of the software and rather surprisingly, a Qualcomm MSM8960 processor clocked to a speedy 1.9GHZ.

Rumors have been swirling around regarding the Samsung Galaxy S4, the rumored successor to the Galaxy S3, and its features. We’ve heard that it may include a 4.9-inch FHD display with 1080p resolution, a 13MP camera, and a release date that is pegged for April following a potential launch next month either on March 15th or March 22nd. 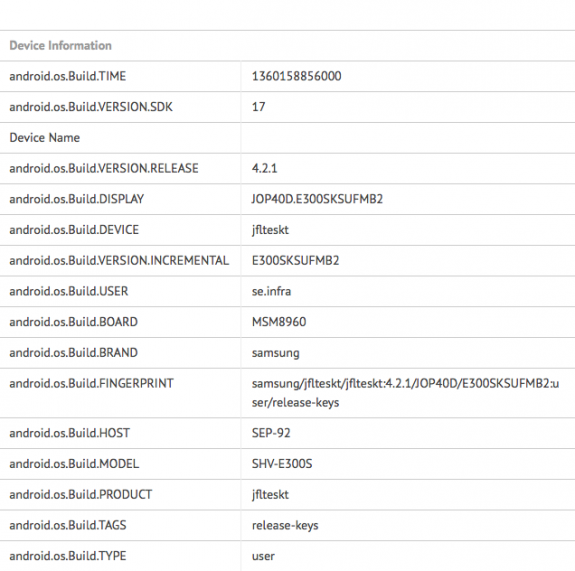 The Galaxy S4 has emerged in new alleged benchmarks today.

A GLBenchmark for the SHV-E300S has appeared, courtesy of SamMobile, and it depicts a device running a processor clocked at 1.9GHz, likely a Qualcomm SoC. In addition, it appears that it has a display using 1920 x 1080 resolution, the Galaxy S4 is rumored to have 1080p resolution and Android 4.2.1 Jelly Bean.

Android 4.2.1 isn’t the latest version of Android 4.2 as Android 4.2.2 rolled out today to Nexus devices, not including the Nexus 4.

At this point, these benchmarks need to be taken with a grain of salt. One, benchmarks are easily faked so these, and the previous ones for that matter, could definitely be fake. And two, Samsung not putting a Exynos processor on its Galaxy S4 would be a little odd considering the existence of the Exynos 5 and the Exynos 5 Octa. Odd, but not entirely impossible.

Android 4.2 Jelly Bean is not surprising and neither is the reference to a 1080p display as both are likely going to be coming on the Galaxy S4.

We should find out for sure in just a couple of weeks as Samsung is rumored to be announcing the Galaxy S4 next month at an Unpacked event with a release planned for April in Europe and unsurprisingly, some time later in the United States.