On stage at the Radio City Music Hall, Samsung finally unveiled its Samsung Galaxy S4, a device that emerged in rumors back in 2012 and finally made its way to the official stage today. The device is close to what rumors suggested in that it features a 5-inch 1080p display, quad-core processor, 13MP camera, plastic design like the Galaxy S3, Android Jelly Bean, and as expected, a bunch of new software features crafted by Samsung. 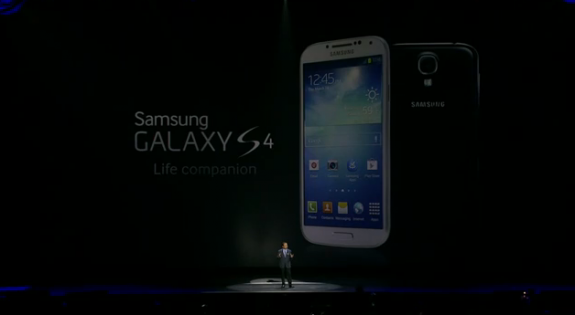 The Galaxy S3 will evidently get Galaxy S4 software features at a later date.

There are a bunch of new software features that will be coming with the Samsung Galaxy S4, in addition to Android 4.2 Jelly Bean. A few of the highlights included a Dual Camera mode that makes use of both the rear and front-facing cameras, Dual Video Call which allows users to show what they’re looking at during a call, Group Play for shared music, photos and documents, and of course, smart features from Samsung.

While this is fantastic for future Galaxy S4, owners of older Galaxy devices are likely wondering the if the software will be coming to their phone. According to PCMag, the answer is yes. The publication spoke to Nick DiCarlo, Samsung’s vice president of portfolio planning, who says that many of the Galaxy S4’s software improvements should make their way to the Galaxy S3.

DiCarlo was mum on exactly what those features might be but he said that anything that is not dependent on hardware like infrared, will emerge on older devices. That likely means that the Galaxy Note 2 will see some of these features as well. The camera features are the most likely candidates as they don’t need any kind of new hardware to run.

There is no time table for a release for these features but Samsung has been diligent about providing speedy updates for its flagship smartphones.

The Samsung Galaxy S4 will be rolled out to carriers starting in April with AT&T, Sprint, T-Mobile, U.S. Cellular and Verizon all confirming the device for release in the second quarter of this year.