The Samsung Galaxy S5 is finally on shelves but that doesn’t mean that Galaxy S5 details have stopped flowing. In fact, in recent days, we’ve seen a number of details emerge from the shadows and here, we take a look at the five that we think are the five most important post-release details concerning Samsung’s new Galaxy S.

Last week, Samsung finally delivered its Galaxy S5 to the United States and to more than 100 countries around the globe. The device replaces the Samsung Galaxy S4 as the company’s flagship smartphone and it joins the Samsung Galaxy Note 3 in a two-pronged attack against the likes of the iPhone 5s, HTC One M8, Nokia Lumia Icon, and more.

The Samsung Galaxy S5 is considered a premier smartphone thanks to the features that it has on board. The device boasts one of the best smartphone displays in existence, offers users a speedy processor for fantastic gaming and multitasking, brings users a solid camera, a water and dust resistant design, Android 4.4, and a bunch of new software features including several focused on health.

Consumers around the world, including here in the United States, are taking a long hard look at the Samsung Galaxy S5, weighing it against the other options on the market. Those that are interested in the Samsung Galaxy S5 probably absorbed a ton of details in the build up to the Galaxy S5’s release last week but there are still some more details that prospective buyers need to know about.

Here, we take a look at five new Samsung Galaxy S5 details (or in one case, the lack thereof) that should benefit those that are taking a look at the brand new Galaxy S smartphone from Samsung.

MetroPCS announced that it would release the Galaxy S5 in April but it still hasn’t unleashed the beast. This has sent customers into a bit of a panic and many have begun asking about its arrival.

Thus far, the carrier remains tight lipped about a release date though it did tell prospective customers that it plans to release details “very soon.” It just didn’t say when. Last week we saw a MetroPCS team member showcase a Samsung Galaxy S5 shirt so it does appear that the Galaxy S5 release on MetroPCS is close.

For what it’s worth, Best Buy is currently taking pre-orders for the MetroPCS Samsung Galaxy S5 though it’s going to cost buyers a hefty $650 off-contract.

Those looking to buy the Samsung Galaxy S5 on a pre-paid carrier are going to have to wait a little bit longer than those that are alright with buying the Galaxy S5 on a major carrier.

Weeks ago, Boost Mobile announced that it would be carrying the Galaxy S5 in the second quarter. The second quarter spans from April to June and many customers were worried that the carrier wouldn’t release the device until the summer. Fortunately, the carrier has soothed the minds of its customers by announcing a specific release month and thankfully, it isn’t June. 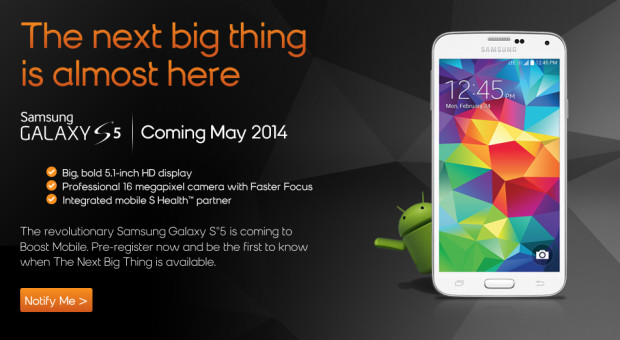 The Boost Mobile Galaxy S5 release will land in May.

Boost Mobile says that it will be releasing the Galaxy S5 in May, specific date unknown. It’s still not clear how much the carrier will charge for the Samsung Galaxy S5 though we do expect its pricing to be competitive. The carrier currently sells the iPhone 5s 16GB for $550. The iPhone 5s will be its biggest competitor.

The Samsung Galaxy S5 has been priced at $650 and $660 off-contract elsewhere but again, it’s unclear if Boost will subscribe to that high price point.

The Virgin Mobile Galaxy S5 release will take place in May.

Thanks to the carrier’s website, we now know that the Samsung Galaxy S5 will arrive on Virgin Mobile in May. The carrier is mum on a specific release date though customers can assume that it will touch down in and around the same time that Boost Mobile puts it on physical and virtual shelves.

The Virgin Mobile Galaxy S5 price remains out of reach though we expect the carrier to announce pricing ahead of time. Pricing typically does not arrive on the day of a device’s release. Again, the price should be competitive with the off-contract pricing that we’ve seen for the iPhone 5s and the Galaxy S5.

Those who are looking for a Samsung Galaxy S5 deal will be happy to know that there are a number of big time deals available around the web. Three of the biggest come from Amazon.

There is one deal that prospective buyers will want to take a pretty hard look at. The Verizon Galaxy S5 is currently being sold for $99.99 on-contract. That is $100 off the typical on-contract price and it comes with free shipping to make the deal even more enticing than it already is. It’s not clear how long Amazon will keep the price that low and it typically shoots prices back up.

It also appears that the fingerprint sensor may not be as secure as Apple’s TouchID because it doesn’t force users to enter in a passcode when specific conditions are met. It’s going to take a lot of effort for thieves to breach the security but the vulnerability is still there, at least for the time being.