A new Samsung Galaxy S5 concept incorporates a number of Galaxy S5 rumors, bringing them to life in a beautiful render that stands as a major teaser ahead of the device’s rumored launch date on February 24th.

The Samsung Galaxy S5, for the moment, is the world’s most heavily rumored smartphone. Rumors have been flying around left and right, in an attempt to reveal the big name device before its big launch day. That launch day is rumored for February 24th at the company’s Unpacked 5 Episode 1 launch event at Mobile World Congress in Barcelona.

Samsung still hasn’t confirmed the Galaxy S5 for arrival but signs, and a report from The New York Times, all point to the Galaxy S5 launch date taking place on February 24th.

While rumors have been swirling, one thing that hasn’t leaked is the Galaxy S5 itself. Indeed, we recently saw a possible 3D Galaxy S5 model leak to the surface, courtesy of the well-sourced Sonny Dickson, but it wasn’t the device itself. It’s also not clear if the model is, in fact, based on the real Galaxy S5.

This has left the door wide open for designers to issue their own interpretations of the Samsung Galaxy S5, Galaxy S5 concepts that combine known Galaxy S5 rumors in an effort to excite, and tease, prospective Galaxy S5 users ahead of launch. 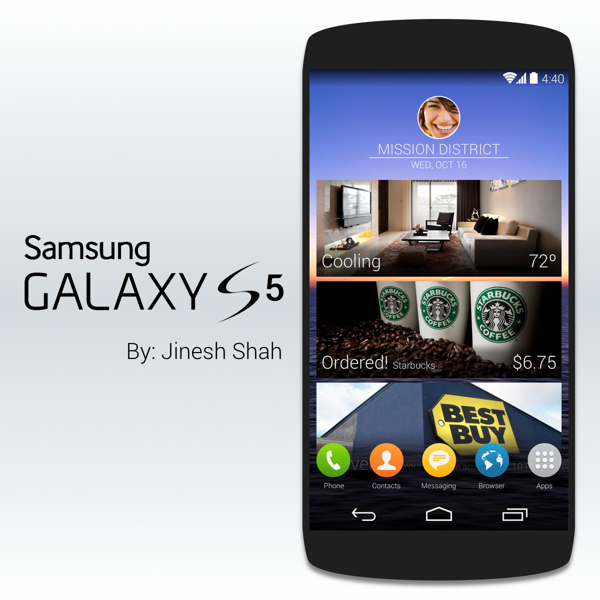 The latest is a render from Jinesh Shah who has posted his Galaxy S5 concept on Behance. Shah’s concept isn’t futuristic nor does it pull in a metal back plate but it does offer a look at a number of rumored Galaxy S5 features. 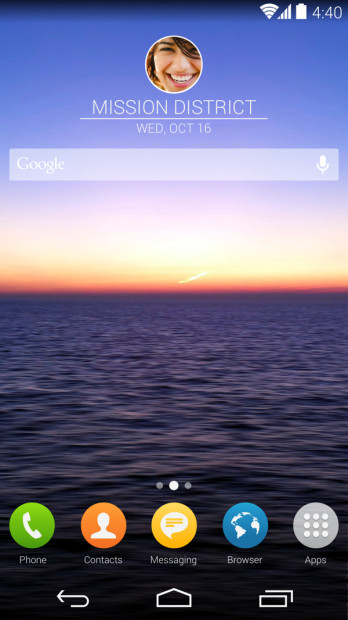 Shah’s concept pulls in rumors that suggest that the device will not have a physical home button and will instead, rely on on-screen buttons for navigation. This rumor goes against the 3D model that we saw arrive earlier this week though it remains a possible Samsung Galaxy S5 feature.

More importantly, Shah’s concept ropes in some of the software rumors and leaks that we’ve seen emerge in recent weeks. This Galaxy S5 concept showcases the potential TouchWiz software update that we saw @evleaks issue several weeks ago. The new pastel color scheme and the tile based menus are all present here, offering a look at what it could look like on board an actual phone.

Shah has also incorporated the icons that we saw emerge on Samsung’s Unpacked 5 invite earlier this month. The icons included Speed, Outdoor, Curiosity, Fun, Social, Style, Privacy, Fitness and Life. Samsung did not explain them though it’s possible that they will be incorporated into Samsung’s Galaxy S5 software. 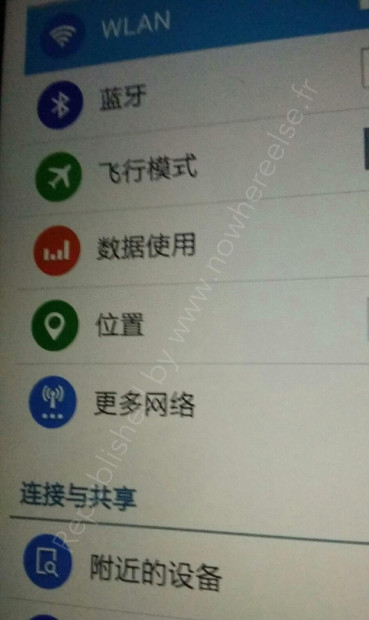 In fact, new evidence from the credible Nowhereelse suggests that that could very well be the case. Some of those icons have shown up in a photo of what appears to be a first look at part of Samsung’s new interface.

Overall, the look is a dramatic change from the one found on the Galaxy Note 3 and Galaxy S4 and it could be that Samsung incorporates this new look into its new flagship.

Rumors point to some major changes on board the Samsung Galaxy S5. The device is rumored to have a high-resolution screen, possibly QHD in nature, and sport a brand new 16MP camera. Galaxy S5 rumors also peg it as having Android 4.4.2 KitKat, a speedy processor and a design that could be made out of metal, plastic or both.

Samsung Galaxy S5 release date rumors are static for the moment though they have centered around a launch in February and a release at some point in April though Samsung historically has taken only a month between launch and release.