The Samsung Galaxy S5 launch is likely months away but that hasn’t stopped designers from coming up with their own ideas about how the upcoming Galaxy S4 successor should look. The latest Galaxy S5 concept is one that offers a truly stunning metal design and a flexible display, two features that may wind up being apart of Samsung’s upcoming flagship.

It’s only September and already, the Galaxy S5 rumor mill is churning. In recent weeks, we’ve seen a number of different Galaxy S5 rumors emerge, ranging from whispers about a 16MP camera with Optical Image Stabilization to rumors of a metal design. And now, with Samsung set to introduce a Galaxy Note 3 with an unbreakable, curved flexible display, consumers are wondering if the Galaxy S5 will not only bring a brand new design but also offer Samsung’s Youm flexible technology.

Read: Samsung Galaxy S5: Early Look at What to Expect.

Rumors suggest that the Galaxy S series may be overtaken by a new premium series called the Galaxy F, but that remains unconfirmed. For now, the Galaxy S5 is going to be the talk of the town. And while the device itself likely won’t emerge until 2014, enthusiasts are already dreaming up their own ideas for Samsung’s flagship.

The latest is a concept from GalaxyS5Info which showcases a metal Galaxy S5 design and a flexible Youm display, bringing the Galaxy S5’s possible future to life. The concept is also outfitted with the rumored 16MP camera but because this is a concept and not a real phone, we have no idea what sample photos might look like. 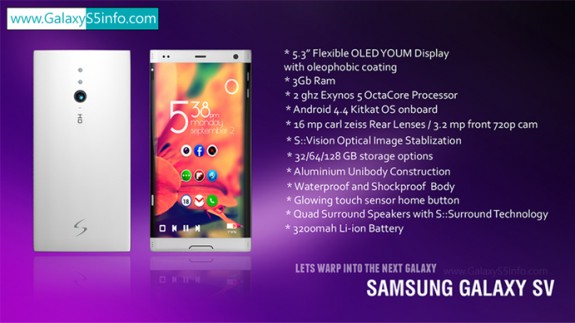 This Galaxy S5 concept uses features that may arrive on the real Galaxy S5.

While the real Galaxy S5 or Galaxy F will likely look vastly different than this concept, this device does hint at what the future holds. Flexible displays, high-powered cameras and elegant designs are more than likely going to be in the future of a new flagship Galaxy and really, all flagship smartphones going forward.

Given Samsung’s history, we don’t expect the company to announce a new Galaxy until March of next year but in the meantime, prospective buyers can sink their teeth into concepts and the Galaxy S5 rumors that will surely accompany them on the road to launch.