Samsung finally took the curtain down from around its Galaxy S5 today and went into detail about the Galaxy S4 successor’s hardware specs, its software and its release date details. As expected the Galaxy S5 will be coming with a number of new features including a water and dust resistant design, Android 4.4.2 KitKat, and a release date that lands in April. 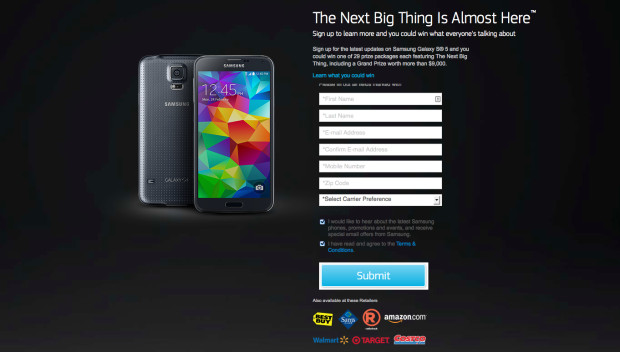 The Samsung Galaxy S5 release date is confirmed globally for April and says that it will land for 150 countries on April 11th. We still don’t know if that date applies to the United States. That said, the company, through its sign up page, has confirmed a number of details for the United States including a contest that offers free Galaxy S5 models and a chance to win a grand prize that is worth over $9000.

Samsung posted a new Galaxy S5 sign up page that confirms a number of details for prospective Galaxy S5 buyers inside the United States.

First and foremost, it confirms the Galaxy S5 and allows users to sign up for more information about Samsung’s Next Big Thing. Those who do sign up for more information will be entered into a contest wherein Samsung will dish out free Galaxy S5’s to 29 lucky entrants. The company also says that it will give away a grand prize worth over nine grand.

The contest ends on March 20th, or, just a few days before the start of April. Again, it’s unclear how soon Samsung will release the Galaxy S5 in the United States.

The sign up page also confirms a few more details. It looks like the Galaxy S5 will be made available in a number of retail outlets including Best Buy, Sam’s Club, RadioShack, Amazon, Walmart, Target, and Costco. These are standard retail partners and they should get the Galaxy S5 in and around its release date in the United States.

Samsung confirmed that the Galaxy S5 would be heading to major carriers in the United States and the sign up page appears to allude to a number of major carriers including AT&T, Sprint, T-Mobile, U.S. Cellular, and Verizon. The drop down menu also lists MetroPCS, a smaller 4G LTE service provider.

U.S. Cellular confirmed to Gotta Be Mobile that it will be releasing the Galaxy S5 in the month of April though it declined to offer a specific date for its users.

As for the device itself, the Galaxy S5 will come equipped with a new design, a larger 5.1-inch display, Android 4.4.2 KitKat, a new 16MP camera, and a fingerprint sensor embedded in the device’s physical home button. It’s still not clear how much the Galaxy S5 will cost though rumors point to a cheaper price tag than the Galaxy S4’s starting $199.99 price.