Samsung Galaxy S5 rumors continue to emerge from the shadows as we march into the new year and get closer to the rumored Galaxy S5 release date.

For weeks, the Galaxy S5 rumor mill has been at work, trying to uncover the secrets of Samsung’s next flagship smartphone. Already, we’ve seen a number of features rumored for arrival including a brand new processor, a new camera sensor, two new designs including one of metal and one of plastic, Android 4.4 KitKat, a 5-inch display that could boast impressive resolution, and a launch date that is said to be in February.

Yesterday, we saw Galaxy S5 design rumors thrown into flux and today, the Galaxy S5 feature set is once again taking a turn as a new benchmark for a device dubbed SM-G900F, a device that has shown up before, and one that AnTuTu is claiming could be the Samsung Galaxy S5. While it’s extremely hard to trust benchmarks, it’s interesting that the features here match up with many of the rumored Galaxy S5 features that we’ve heard about over the past month or so.

This benchmark for the SM-900F shows a device running Android 4.4 KitKat, a piece of software that is almost certainly going to be on any Galaxy S5 launched next year. It’s running a Qualcomm Snapdragon 800 quad-core processor, but not the new Snapdragon 805 chip that debuted earlier this year.

It shows the device as having 3GB of RAM and a 16MP camera, the latter of which has been rumored numerous times as a key feature on the incoming Galaxy S5. Interestingly, this device is utilizing a 1080p display rather than the QHD display that we’ve heard rumored, a display that spawned the Galaxy S5 February launch rumors. Samsung is rumored to be debuting a QHD display at Mobile World Congress in Barcelona in February. 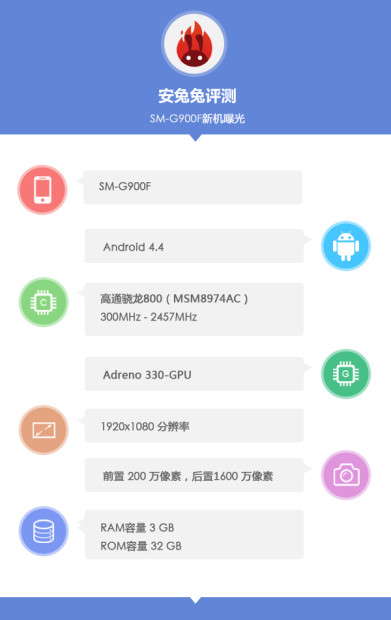 Several weeks ago, a SM-G900S showed up in benchmarks touting a 2K display, Android 4.4 KitKat, and a Qualcomm Snapdragon 800 quad-core processor. Rumors have suggested that Samsung will be releasing two Galaxy S5 models, one premium, the other budget, so it could be that these two models are both the Galaxy S5, something that would explain why we’re seeing two different sets of specifications. The SM-G900S could also be something else entirely. The SM-G900F as well, even if AnTuTu is confident that it’s the Galaxy S5.

Yesterday, we saw the reliable evleaks claim that AT&T is testing a device dubbed Samsung SM-G900A, a device that very well could be the Galaxy S5. He isn’t sure that it’s the Galaxy S5, only that it could be. Just like the SM-900F and SM-G900S.

AT&T is testing a version of that high-res Samsung handset (SM-G900A), giving some support to the theory that it’s an int’l flagship (GS5?)

At this point, it’s extremely tough to say though we suspect that Samsung Galaxy S5 rumors will start to firm up even more once the new year rolls around. Galaxy devices, particularly flagships, have had a difficult time avoiding major leaks so we expect these rumors to become more clear once time rolls on.

Rumors point to a Samsung Galaxy S5 release either in March or April and it could very well be that consumers have to wait until then to see the entire Galaxy S5 picture.