The Samsung Galaxy S5 software design may have been revealed ahead of time as a noted leakster has shown off what appears to be a new Samsung phone interface complete with pastel colors, a new font, and a look that appears to be derived from the Magazine UI that we saw emerge on Samsung’s new Galaxy tablets at CES 2014 in Las Vegas.

Samsung likely won’t announce a new Samsung Galaxy S smartphone at CES 2014 but it appears that at least some of the beans have been spilled earlier thanks to the reliable leakster @evleaks. Today, he has leaked a trio of screenshots depicting what appears to be a new software interface that Samsung is “exploring.” 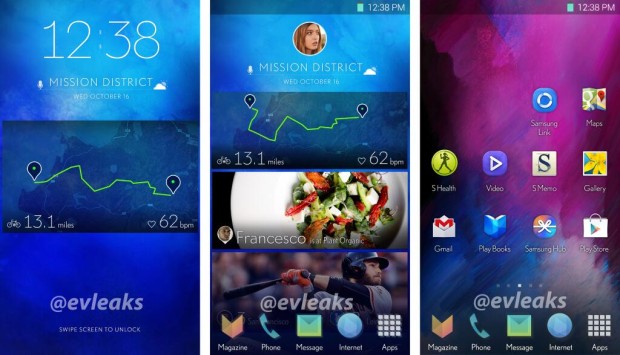 He does not go into any more detail than that though users can take a few things away from the leak. First, the UI uses a new color scheme based on pastels. It’s a much softer look than the bright user interface found on Samsung’s previous Galaxy smartphones. The new UI also uses a lighter font that is much easier on the eyes. While he doesn’t call it by name, the interface here does indeed look a lot like the TouchWiz Magazine UI that we saw emerge on Samsung’s new Galaxy TabPRO and Galaxy NotePRO variants that emerged yesterday in Las Vegas. All of the icons are changed as well.

So, it’s not a stretch to imagine that Samsung is prepping these changes for the next Samsung Galaxy smartphone, rumored to be the Samsung Galaxy S5, a device that will eventually come to replace the Galaxy S4.

Rumors suggest that it will have Android 4.4 KitKat on board, not surprising given that it has been out since November, though until today, no other details were known.

Other Galaxy S5 rumors suggest that the device will come with a 5.2-inch QHD display with high resolution and a 500+ pixel-per-inch count, a brand new processor that could be 64-bit in nature, a 16MP camera with Auto Focus, and quite possibly, a metal design. Metal design rumors have floated around for years though not as frequently as we have seen this time around.

Unfortunately, we may not know what’s on board the Galaxy S5 for sure until later in the year. Rumors have pointed to a launch at Mobile World Congress 2014 in Barcelona, Spain in late February though those rumors have been contradicted in recent days.

Yesterday, industry insider Eldur Murtazin suggested that Samsung was gearing up for a launch in March, possibly in a European capital, ahead of a release around May 1st. This falls in line with last year’s Samsung Galaxy S4 launch and release and currently, it makes the most sense.

Samsung has shied away from major trade shows when it comes to major product launches so a launch at Mobile World Congress seems a bit unlikely.