New Samsung Galaxy S5 U.S. release details arrived today as Boost Mobile and Virgin Mobile both confirmed that they will be joining Galaxy S5 carriers AT&T, Sprint, U.S. Cellular, T-Mobile, and Verizon sometime in the second quarter of the year.

Earlier this week, Samsung confirmed that the Galaxy S5 would be coming to 150 countries on April 11th. The company did not confirm exactly which countries would see the device land that day which means that Galaxy S5 release dates remain up in the air for many.

In the United States, AT&T, Sprint, T-Mobile, U.S. Cellular, and Verizon all recently confirmed the Galaxy S5 for arrival in April though they have not provided any specific release dates and they remain up in the air.

What we do know now is that these release dates, whenever they are, will be followed by two more Galaxy S5 releases inside of the United States.

Boost Mobile and Virgin Mobile, both owned by Sprint, today announced that they will be carrying the Galaxy S5 and will be making it available sometime in the second quarter of the year. The second quarter consists of April, May and June. Smaller carriers such as these are typically a few days, if not weeks behind the major carriers so interested consumers will not want to consider them locks for April.

Boost and Virgin both say that they will offer the device off-contract and that users will be able to take advantage of Sprint’s Spark LTE service. They did not announce official pricing though early information pegs the Galaxy S5’s full retail price in and around $650. That price is still not official but is likely. These two pre-paid carriers will more than likely announce these details weeks ahead of the release so that customers can prepare for their arrival. 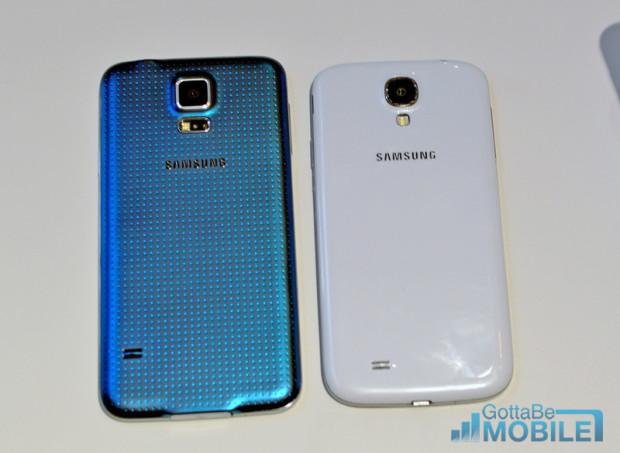 The Galaxy S5 on the left features a new plastic design, compared to the smooth plastic on the S4.

Virgin Mobile and Boost Mobile should be getting the same Galaxy S5 that was announced for the five major U.S. carriers earlier this week. That means a device that sports a 5.1-inch 1080p display, a speedy processor, 16MP camera, a design that is both plastic and water resistant, Android 4.4.2 KitKat, and new TouchWiz software from Samsung.

It will replace the Galaxy S4 as the company’s flagship Galaxy S smartphone and join the Samsung Galaxy Note 3, Samsung’s current Galaxy Note flagship, on shelves.