In a few weeks, the Samsung Galaxy S5 will go on sale and replace the Galaxy S4 as the company’s flagship smartphone model. The Samsung Galaxy S4 remains a solid option thanks to solid software support and a solid price tag and thus, consumers will be comparing the two. Here, we take a look at key differences, and similarities, that consumers need to know about.

Last month, Samsung took the stage at Mobile World Congress 2014 and announced the brand new Samsung Galaxy S5, a device that was rumored for months and months ahead of its February 24th launch. The Galaxy S5, as expected, comes with a number of big time upgrades and will be an attractive option when it goes on sale next month.

We’ve spent a great deal of time with the Samsung Galaxy S4, it has been out for a year, and we’ve also been able to spend some time with the Galaxy S5. And while Galaxy S5 release is still a few weeks away in the United States, there is a lot we can share about how the Galaxy S4 and Galaxy S5 compare.

It’s an important comparison because the Samsung Galaxy S4 remains on shelves and will likely remain on shelves for months and perhaps years to come. We’ve heard from many consumers who are looking into both devices before settling on their next smartphone.

There are many features that only exist on one of these devices, so buyers will need to make an informed decision about what they want, based on the features they need most in a smartphone. That said, let’s take a look at what consumers need to know about these two Samsung Galaxy S smartphones.

The Samsung Galaxy S5 release date is confirmed for April 11th. This is a global release date and one that encompasses the United States. The Galaxy S4, of course, is already on shelves and should stay there after the Galaxy S5’s arrival.

Consumers who are at all interested in the Galaxy S5 would be smart to wait for the Galaxy S5 to show up on store shelves so that they can try out both devices before buying. Most carriers only allow one swap and a 14 day return window, so there is no need to be hasty about a decision. At the moment, there are about 100 Best Buy stores in the U.S. that have the Galaxy S5 out on display. Those that can’t wait for April 11th can check this list to see if the local Best Buy has it available. 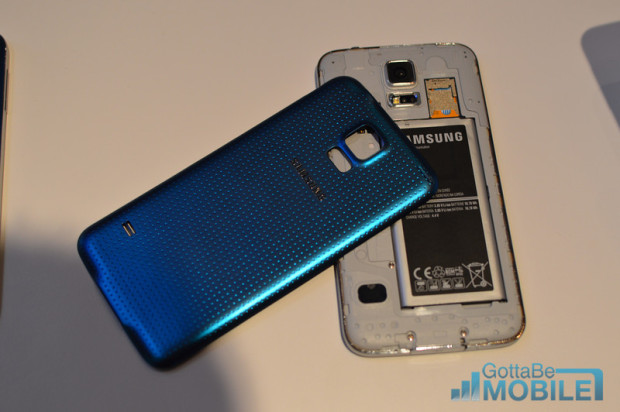 The Samsung Galaxy S5 release date is confirmed for April 11th in the United States. AT&T, Sprint, T-Mobile, and U.S. Cellular are all taking pre-orders ahead of that date and several carriers say that they’ll start shipping orders a few days beforehand.

AT&T, for instance, dropped the Galaxy S4 price down to $99.99, $100 cheaper than the Galaxy S5. Retailers like Amazon offer deals on the Galaxy S4 as well. The AT&T Galaxy S4 is just $50 on-contract at Amazon.

As far as carriers are concerned, there are a few differences, at least at the moment. The Galaxy S5 is coming to AT&T, Sprint, U.S. Cellular, T-Mobile, Verizon, Ting, Boost Mobile, Virgin Mobile, and MetroPCS. Other carriers might announce availability in the future but for now, that’s where it’s headed.

The Galaxy S4 is available on all of those carriers except for Boost Mobile. It’s also available on C Spire Wireless and Cricket Wireless, two smaller carriers that are popular in the U.S.

The Samsung Galaxy S5 and Samsung Galaxy S4 are both made out of plastic, offer a microSD card slot for expanded storage, removable back for easy access to the battery, and a physical home button for navigation. They also come with Corning Gorilla Glass 3 in the front to protect the display from harm.

The devices also share two other design traits. Both offer small bezels and a silver band running along the edge of the device. So while there are indeed some similarities between the two, there are also some very distinct differences. 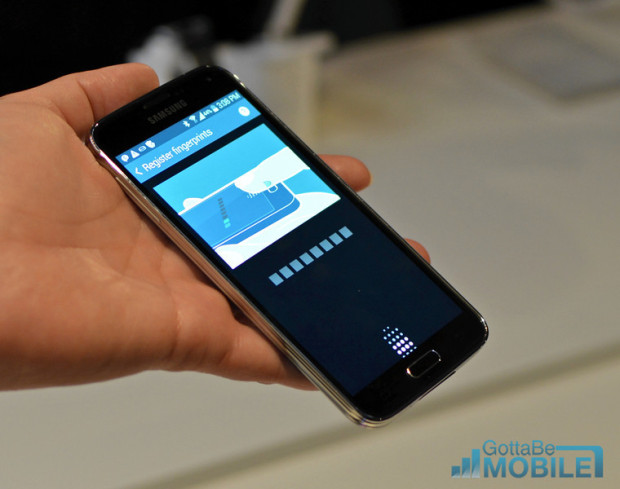 Use the fingerprint reader to secure the Galaxy S5.

Samsung’s Galaxy S5 is designed to be water-resistant and dust-resistant. The IP 67 certification allows users to carry the phone around without worrying that a sink, bathtub, shower or puddle will break the phone.  The design also includes a seal to prevent water getting in the USB port and a seal on the back to keep water out. The Galaxy S4 does not feature this type of protection which means that the only way to get this kind of protection is through the use of a case.

Last year’s Galaxy S is thinner and lighter than the Galaxy S5 though the overall size difference isn’t too significant. Samsung managed to increase the size of the display without adding much to the overall footprint.

The Galaxy S5 is wider and taller than the Galaxy S4 though we didn’t find it to be any less pocketable. Both of these devices are comfortable to hold as well.

The Samsung Galaxy S5 is slightly larger than the Galaxy S4’s display. While the Galaxy S4 offers a 5-inch display, the Galaxy S5 display is 5.1-inches in size. The size difference is noticeable but it’s not much of an advantage. Both offer ample real estate for multitasking, playing games or watching a movie while on the go. 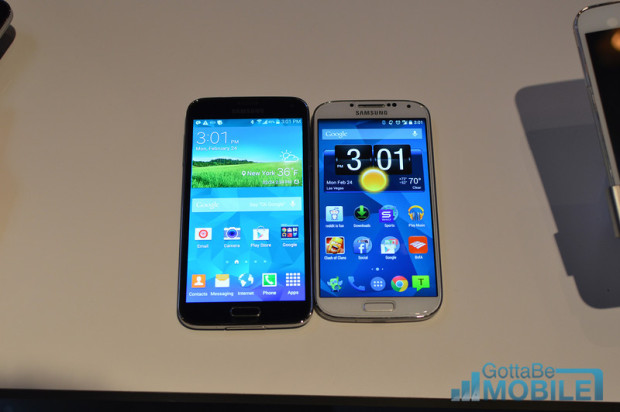 The Galaxy S5 is a little bit bigger than the Galaxy S4.

Instead of a QHD display, the Galaxy S5 comes with a full HD 1080p display, similar to the Galaxy S4. Movies, games, and other content will look good on both of these devices.

Both of these displays offer a nice viewing experience and can adapt to the environment to deliver a better looking on-screen visual, but the Galaxy S5 comes with three features not available on the Galaxy S4, at least for the moment:

There is a chance that these features could land for the Galaxy S4 in a future Android update but nothing is guaranteed at this point. 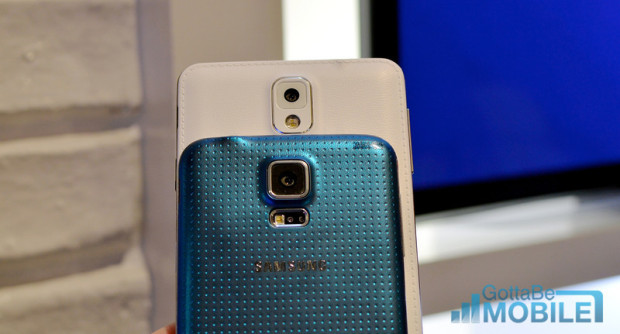 The other feature that stands out is the ability to pick a point of focus after taking the shot. This allows uses to blur a background or foreground right on the phone. The Samsung Galaxy S5 can also show HDR previews live on the phone, something that the Galaxy S4 simply cannot do. It can also record 4K video while the Galaxy S4 cannot.

Samsung’s Galaxy S4 takes advantage of a superb camera application but live HDR and selective focus are not on board and there is no guarantee that they will ever arrive for Samsung’s former flagship.

While both devices run Android 4.4.2 KitKat, Samsung includes a new version of TouchWiz on the Galaxy S5. The Samsung Galaxy S5’s new software is focused on some key areas including health, fitness, security, and battery life.

The software includes the new S Health 3.0 which, when combined with the pulse reader on the back of the Galaxy S5, allows users to record their heart rate and track it in the app. It’s a nice feature but as we’ve pointed out, Samsung Galaxy S4 owners can purchase a Gear Fit fitness band to track their pulse and more.

The Galaxy S5 offers a new Ultra Power Saver mode that turns the display black and white and limits running apps when you need the battery to last as long as possible. It also includes a flatter design and a number of small tweaks to the look of the operating system. 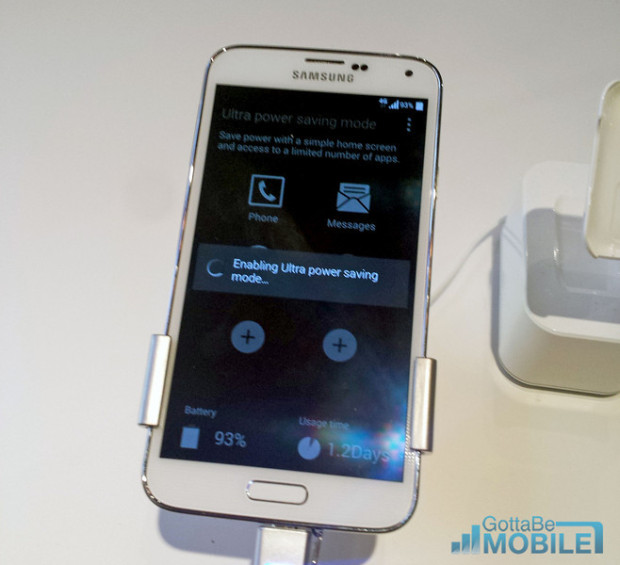 Some of these features might wind up on the Galaxy S4 but Samsung typically does not offer the full feature-set to its older devices. Instead, it chooses to offer a few bits and pieces of the new software to help keep the smartphone fresh.