While the HTC One will get replaced by the all new HTC One later this month, it will still remain a solid smartphone thanks to its hardware, its software and a declining price tag. What this means is that some consumers will be weighing it against 2014’s best including the all new Samsung Galaxy S5, a device that is coming to shelves next month.

Last year, the Android world was dominated, in large part, by two smartphones. The first, the Samsung Galaxy S4, a device that replaced the Galaxy S3 as Samsung’s flagship smartphone and a device that offered users powerful software, hardware, and a large choice of carriers inside the United States.

The other, the HTC One, a device that also boasts superb hardware, quality software and connectivity on the some of the largest carriers in the United States. Both of these devices are widely considered to be two of the best smartphones of all time so it’s not surprising that they are both still relevant in 2014.

HTC is set to debut a new HTC One later on this month and it will carry the torch against the competition in 2014. However, its arrival does signal the end for the original HTC One. No, it’s going to live on as an option for consumers thanks to its feature set. And that means that it’s worth comparing to this year’s big name devices.

What we have is the HTC One, an aging device but a device that we consider to still be among the best options on the market. Thus, the comparison to the Galaxy S5 is warranted.

At the moment, we can’t offer a full comparison. We need to spend some more time with the Galaxy S5. However, what we can do is offer up some key differences between the HTC One and Galaxy S5 ahead of the latter’s launch.

The first big difference that consumers are probably going to notice is the difference between the form factors. The Galaxy S5 and HTC One look insanely different.

On one hand, you have the HTC One. The HTC One features a premium metal design that is on par with the iPhone 5s’. It feels like an expensive piece of hardware, it feels good in the hand, and it’s pretty to look at. These are important things that consumers typically consider when it comes to the design of a smartphone. Oh, and it’s also durable. 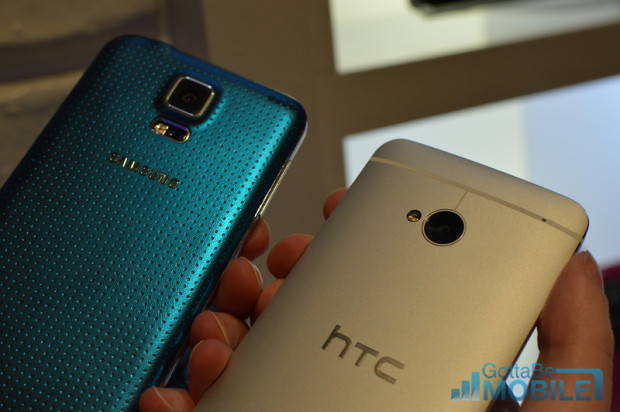 Now, it’s not as thin as some smartphones (9.3mm) but it’s metal design doesn’t pack on the weight (143 grams). It’s pocketable and easy to grip with one hand despite its size.

Those looking for a microSD card slot or a removable back aren’t going to find one. Instead, users are stuck with 32GB (64GB HTC One is only available at AT&T) and the stock 2,300 battery that has received mixed reviews.

On the other hand, you have the Samsung Galaxy S5 design that isn’t made of metal but instead, incorporates a unique perforated pattern on the back cover that Samsung says gives it a modern ‘glam’ look. In other words, it’s a stylish piece of plastic. It does feel and look nicer than the Galaxy S4’s plastic back but it’s still not as nice as the metal on the HTC One. 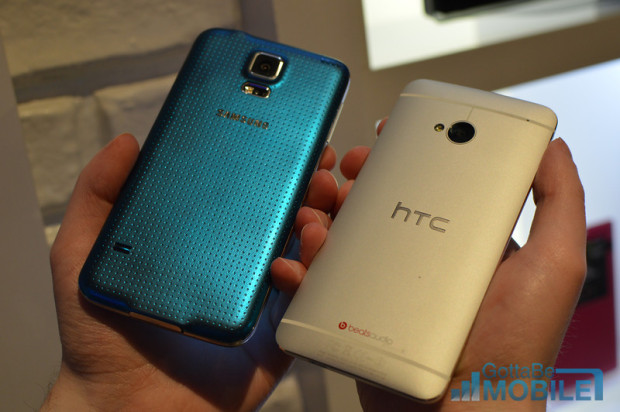 The Galaxy S5’s design does come with some perks though. Because it’s plastic, it features a microSD card slot for expandable storage and a removable back for use with an extended battery for extra juice. This means that users can go beyond its larger 2,800 mAh stock battery if they choose.

It’s thinner (8.1mm) but a little heavier than the HTC One (145 grams) but there is a reason for its weight. The Galaxy S5’s design is dust and water resistant, something that simply isn’t found on the HTC One. These qualities make it more attractive to those that often take their smartphone into rugged environments.

When you look at the HTC One, you’ll notice that the navigation keys are set up differently than they are on the Samsung Galaxy S5. The HTC One relies on two soft press navigation buttons that reside on the bezel beneath the display. It offers a back key and a home button for easy access to the home screen. They’re useful but they aren’t special. 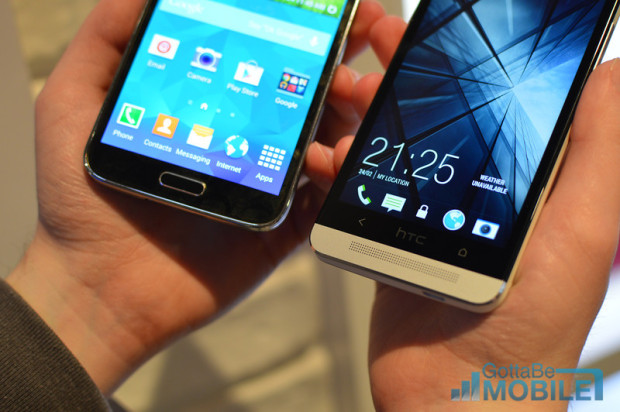 The Galaxy S5 features a fingerprint sensor. The HTC One does not.

The Galaxy S5 utilizes a single home button that is raised up from the bezel. Only, it’s not an ordinary home button. No, Samsung has included a fingerprint reader inside the home button that adds a layer of security and provides convenience to those that are tired of having to input a passcode or move their finger around on the screen to unlock the device.

Samsung has opened up the fingerprint reader to developers which means that we could see some tweaks and perhaps new apps revolve around the Galaxy S5′s home button and fingerprint sensor.

Another key difference between the HTC One and the Samsung Galaxy S5 is software. Yes, both devices run Android 4.4 KitKat but that’s where the similarities end.

The HTC One runs Android but it also utilizes something called HTC Sense 5. For those unfamiliar, Sense is HTC’s user interface that offers not only a different look from stock Android but different features as well. Many of those features can be seen in the video below and we recently reviewed HTC’s Sense 5.5 update with Android 4.4 for those that need more detail.

Samsung’s Galaxy S5 doesn’t use Sense. Instead, it uses TouchWiz which is Samsung’s unique user interface. As you can see in the video below, it looks and performs a lot differently than Sense 5.

The software found on the Galaxy S5 is far less intense than some of the more recent updates to TouchWiz but there still are some interesting additions including a new Kids Mode and a brand new Camera app that rivals HTC’s.

Samsung’s Galaxy S5 will come to more than just the big four and a handful of smaller carriers. Already, the Galaxy S5 has been confirmed for AT&T, Sprint, T-Mobile, U.S. Cellular (the nation’s fifth largest carrier), Verizon, MetroPCS, Boost Mobile, and Virgin Mobile. We fully expect there to be more carrier options on the table once the Galaxy S5 arrives later on this year.

Both the Samsung Galaxy S5 and HTC One utilize displays with 1080p resolution but the Galaxy S5’s display is a little bigger diagonally, offering users a little more real estate for things like gaming and watching shows. 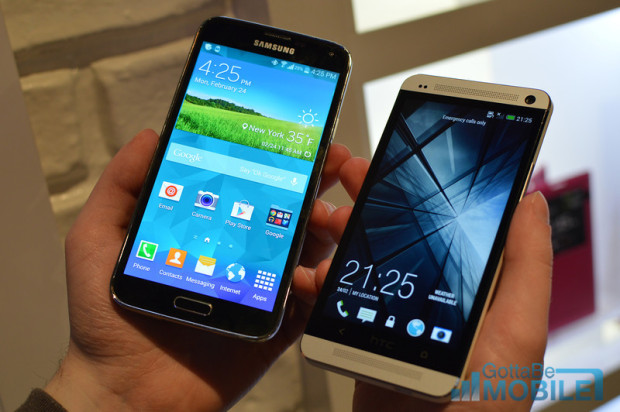 The Galaxy S5 is the second from the right. The HTC One is third from the left.

We should also point out that the Galaxy S5 display comes paired with some unique software. The display comes with a feature called “Ultra Power Saving Mode” which turns the display to black and white and will also turn off all unnecessary features in an effort to conserve battery life. It’s a feature that Samsung claims will save users a ton of battery life in the long run.