With a Samsung Galaxy S6 launch date all but confirmed, we want to take a look at what prospective Galaxy S6 buyers can expect when Samsung takes the stage to announce the successor to the Galaxy S5.

Samsung still hasn’t confirmed the Galaxy S6. Its hinted at the arrival of the device, sure, but it has yet to outright confirm the Samsung Galaxy S6 as its replacement for the Galaxy S5 and competitor for devices like the iPhone 6 and HTC One M9. We’re also still seeing Galaxy S6 rumors pop up left and right so there’s still work to be done.

At some point, Samsung will announce this phone and it’s looking like the Galaxy S6 launch date could be just a few weeks away. In fact, we’re positive that we’re just a few short days out from Samsung’s big day.

In the buildup to the Galaxy S6’s announcement, we’ve been taking a look at its most important details and making some predictions of our own. Recently, we offered up our expectations compared to a few different phones including the iPhone 6 and Galaxy S5. Today, we want to take a look at what we expect from the Galaxy S6 launch date, also known as its announcement date, a date that appears to be close.

Samsung hasn’t confirmed the Galaxy S6 yet but that doesn’t mean that we don’t know when to expect the company’s announcement. Earlier this month, Samsung sent out invites to an Unpacked event at Mobile World Congress on March 1st. The invites didn’t say “Galaxy S6” but there are a few reasons why you should expect that date to serve as the company’s Galaxy S6 launch date:

It’s safe to circle that date, in pen, if you’re at all interested in the Samsung Galaxy S6.

We expect Samsung’s 2015 Unpacked event to mirror its events from last year. That is to say that we don’t expect the ridiculous kind of spectacle that we saw from the Galaxy S4 event in New York back in 2013. We’re expecting this event to be fairly straightforward with Samsung executives, and maybe a guest or two, outlining the key features of its new products. We’re also expecting a symphony. Samsung’s got to have a symphony or else this isn’t Unpacked.

We also expect this to be a fairly lengthy show. The company has a lot riding on the success of the Samsung Galaxy S6 and its other products and we expect Samsung to take the time to outline all of their key features and really promote the devices to consumers in the United States and countries around the world. These events are primarily for marketing purposes and we expect Samsung to take full advantage.

Expect the Samsung Galaxy S6 to be the star of the show but don’t expect it to be the only product that Samsung announces on stage. We’re expecting at least two phones from Samsung on March 1st including a Galaxy S Edge or Galaxy S6 Edge. 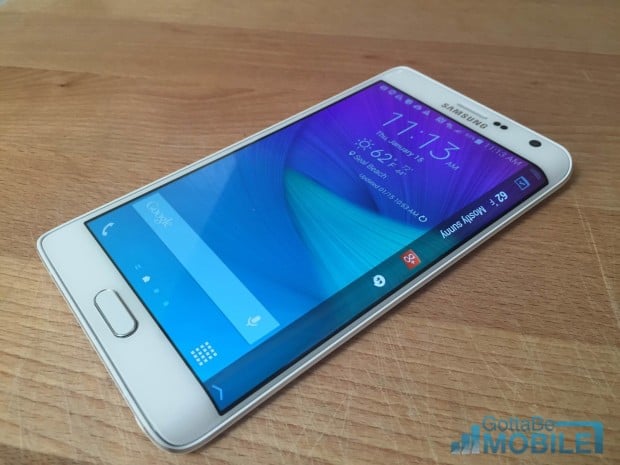 Count on a Galaxy S6 edge with a curved display lie the Note Edge shown here.

We expect Samsung to continue to tout the benefits of its curved displays. It’s still going to be a bit of a hard sell, the technology still isn’t very mature, but the company still is going to try.

We expect Samsung to trout out wearables on stage. Rumors point to the arrival of a round, Apple Watch competitor, though many of the details including its retail name remain a mystery. Rumors point to an arrival at MWC and given that MWC falls a few weeks before Apple’s expected to release the Apple Watch, we wouldn’t be surprised if Samsung reveals it on stage to try and take away some of Apple’s thunder.

Samsung’s promoted wearables at its last three Unpacked events and it’s showing no signs of slowing down. We expect wearables (smartwatches and maybe even Gear VR) to share the stage with the Samsung Galaxy S6 whether you like it or not.

You should expect Samsung to trot out at least a few of the official Galaxy S6 accessories that it plans to offer. We’ve heard rumors that point to some interesting Galaxy S6 cases for arrival this year and if Samsung really does have something interesting up its sleeve, we’d expect the company to show the technology off on stage.

Even if it doesn’t have something special up its sleeve, we’d expect them to at least touch base on some of the more exciting accessories. Tech like wireless charging. If you’re an accessory hound, expect to get your fix.

Over the years, Samsung’s gotten closer and closer to Apple’s formula. Take the stage, show off a product, lay out the most important details, get the device out on time. Samsung’s missing ingredient has typically been the lack of concrete and specific Galaxy S release date details. Apple always announces a ton of release date information and pushes the iPhone out two weeks later.

Our Galaxy S6 concepts bring the rumors to life.

That said, there are always missing details. Vague release dates are just one example. Others include missing details about colors, storage, and price. We expect there to be some missing Galaxy S6 details on launch day.

Design upgrades could make the choice tougher for consumers this year.

In this case, we hope that we’re wrong.

We don’t expect U.S. carriers to confirm their specific release dates outright, that almost never happens for Android devices, but we do expect the major carriers to throw their weight behind the Galaxy S6 on day one. The Galaxy S series is a popular franchise and carriers like getting publicity while pleasing their customers at the same time. We expect day one confirmations in the U.S.

We also expect day one confirmations from carriers around the world. If you live outside of the United States, in a place like Canada or the United Kingdom, we absolutely expect you to find out about the Galaxy S6 on day one. Carriers love to share the spotlight on launch day and we’ll either see Samsung, or carriers themselves, make announcements on March 1st.

In addition to day one carrier confirmations, we’d expect Samsung to confirm retail partnerships for the Galaxy S6 on day one. Best Buy is an extremely close partner of Samsung’s and we would not be surprised if Best Buy joined the festivities. The two companies are so close, in fact, that Samsung put the Galaxy Note 4 in Best Buy stores ahead of its release. We wouldn’t be surprised if that happened again.

Samsung and its carrier partners almost always hold contests ahead of the release date and we don’t expect anything different here. Look for a U.S. carrier or Samsung itself to offer some kind of contest where you can win a free Galaxy S6 or some other prizes.

The Galaxy S6 concept next to the Galaxy S5 and Galaxy Alpha.

We also expect U.S. carriers to offer some kind of trade-in for the Samsung Galaxy S6. We saw similar offers from U.S. carriers and retailers in the build up to the Galaxy Note 4 release date and we would be surprised if they didn’t try and capitilize this time around. After all, the Galaxy S series is more popular than the Galaxy Note series.