At this point its pretty clear that Samsung intends to unveil two stunning new smartphones in 2017. Those being the bigger Galaxy S8 and Galaxy S8 Plus. Rumors and leaks continue to surface, and now we have concept photos and video bringing those rumors to life. Here’s what we know about the upcoming Samsung Galaxy S8.

Last week the first wave of potentially accurate photos appeared. Cases from popular manufacturers have all but confirmed the Galaxy S8 design and its huge new screen. However, those are still being created based on rumors, so we’ll have to wait and see.

Read: Galaxy S8 Release: Everything We Know So Far

From what we’re hearing Samsung will deliver two beautiful smartphones that will wow potential buyers. Like the first iPhone with a fingerprint scanner, the Galaxy S8 and S8 Plus have huge screens with the fingerprint sensor built into the glass. Deliver a sleek and eye-popping design. Check out the concept video below, then read on for more information.

For months on end we’ve been hearing rumors that Samsung wanted a bigger screen for these phones. That’s the natural evolution of their design, but also because millions of Galaxy Note 7 fans had to return their big-screen device.

The Galaxy S8 and Galaxy S8 Plus will have huge 5.7-inch and 6.2-inch screens — according to leaks, reports, rumors and more. Here’s the best part though, potential buyers will get a huge screen without having to use a bigger device. In fact, the Galaxy S8 may be slightly smaller than the Galaxy S7 while packing a huge 5.7-inch screen similar to the Galaxy Note 7. It’s impressive, really.

Samsung is likely using their next generation AMOLED displays with curved edges and extremely small bezels. The result is more screen on the front and less plastic or metal. Basically making 94% of the front all a beautiful 2560 x 1440 Quad-HD resolution AMOLED display. Here’s one more photo from the concept video above. As a reminder, this is fan-made based on “official cases” that recently leaked the design. 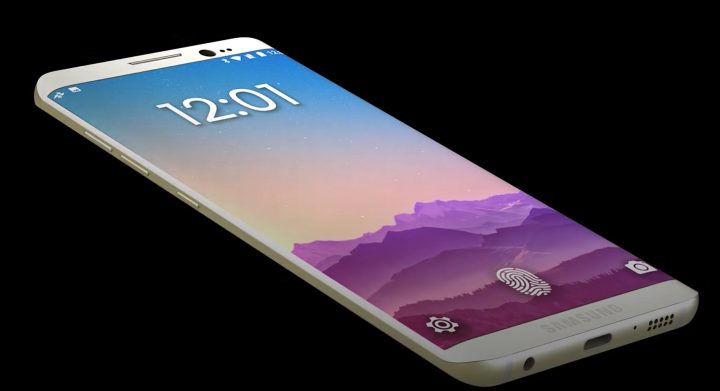 This concept video and photo brings all the most recent rumors to life. Those being a bigger curved display with small bezels. Samsung keeping the 3.5mm headphone jack, USB Type-C for charging, and of course the fingerprint scanner inside of the glass.

If everything we’re hearing and seeing is accurate there will no longer be a home button. Instead, the Galaxy S8 will unlock by holding a finger to the glass, almost like magic. Surely to excite many buyers similar to the first iPhone with TouchID. This leak also states Samsung’s new phones will have stereo speakers. One on the bottom right as shown above, and another on the top left. For improved sound no matter how the phone is being held.

The video goes over additional information that’s been floating around as of late. Not to mention our link at the top of the page is absolutely everything we know right now about Samsung’s Galaxy S8 and Galaxy S8 Plus.

A huge part of the Galaxy S8 and S8 Plus will be the huge screens. Rumors suggest Samsung’s managed to shrink the bezels by an incredible amount. Combine that with no need for a physical home button, and we have the biggest screen in any Galaxy S device without making the phone physically bigger.

Based on the recently leaked case specifications and 3D schematics, GSMArena put together the photo below. 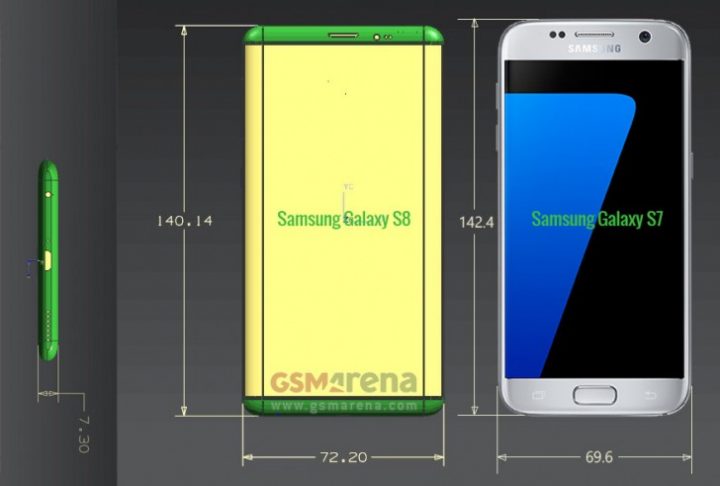 Galaxy S8 vs Galaxy S7 based on leaks

This shows the new Galaxy S8 vs the Galaxy S7. The screen has been increased from 5.1-inches to 5.7-inches, all while the phone is actually slightly smaller overall. Something millions of users will love. Not everyone wants a huge phone. Now you can get a huge screen while still enjoying a portable and pocketable device.

If accurate, the Galaxy S8 will be a little shorter, wider and thinner while packing top-tier specs and a bigger screen. The 6.2-inch Galaxy S8 Plus however, will be nearly the same size as the current Galaxy S7 Edge. At least according to reports and leaked blueprints.

At this point we have a pretty good idea of what to expect in terms of specs and design, but nothing is official until Samsung confirms it. That said, here’s the latest Galaxy S8 specs according to the rumor mill.

It all sounds very appealing, and Samsung could have a winner on their hands if everything turns up accurate. Then again, these are only leaks so potential buyers need to temper expectations and wait for more information.

In closing, we’re hearing the Galaxy S8 may arrive later in 2017 than any year prior. The company is working hard to deliver these beautiful new designs, while also improving safety and inspections at the same time. The latest news suggests a launch in late March or early April, with an April release date. As a comparison, the Galaxy S7 was announced in February and released on March 11th. Buyers could be waiting over a month longer in 2017, but the wait will be worth it.

Stay tuned for more details, and we’ll update with additional information the moment we know more.