The media experience on Android has been poor at best, especially on tablets. Phones are finally getting access to top apps, but as a whole, Android tablets are still lacking.

Imagine my surprise when I turned on the Galaxy Tab 10.1 from Verizon to find access to not one, but two places to get movies and TV shows. Thanks to the 4G connectivity, you can even download the shows while you are on the go.

Android tablets are still behind the iPad, and dependent on manufacturers, but the overall experience is getting better. Find out more about how you can entertain yourself on the Samsung Galaxy Tab 10.1 with 4G LTE below.

Samsung has really delivered with the Media Hub service. Instead of leaving users to find their own media files or to deal with the limited selection in the Google store, Samsung delivers access to a wide selection of movies and TV shows new and old. 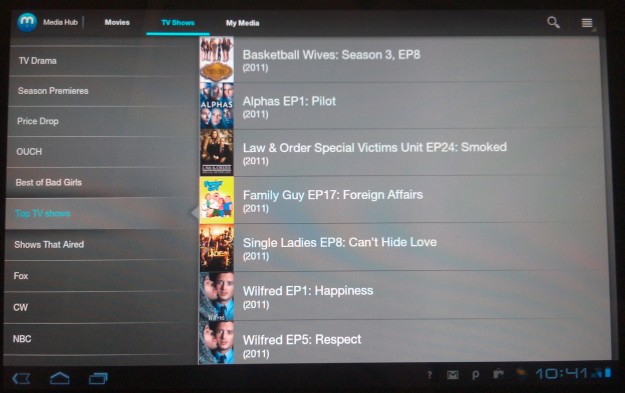 The Samsung Media Hub Offers Many TV Shows and Movies on Android.

Selection in the Media Hub is pretty good, with a range of movies new and old. There are also shows from most major networks available to purchase. I was disappointed that not all new movies were available to purchase or rent, even those in the Google Market. Also, there are Comedy Central shows, but no Daily Show.

I was impressed with the ease of use, which was better than I experienced the last time I tried to buy a TV show on the iPad. Click buy, and the show begins to download over 4G LTE or Wifi. Within a minute you can hit play, while the show downloads in the background. Quality is great with a crisp clear picture and good sound on the Galaxy Tab 10.1.

The Google Market is available on the Samsung Galaxy Tab 10.1 with LTE as well. This is Google’s built-in Movie store, which offers movie rentals for $3.99, but no TV Shows and no movie purchases.

It is nice to have another market available, especially because the Samsung Media Hub lacked recent releases like Limitless and Jane Eyre. It would be nice if Google would add TV shows to the mix, so that you could bring them from one Android device to another. The review unit I have is not rooted, which means I have access to the movie store, but if you root your device, you’ll kiss movie rentals through the Google Market goodbye.

For all the advances and entertainment options I’ve found on the Samsung Galaxy Tab 10.1, Android as a whole is still missing essential entertainment apps on tablets. We have seen the first Netflix ready Android tablet come out, but the rest of the Android devices are stuck without the most popular streaming services — Hulu and Netflix.

In order to offer a real entertainment solution, Android tablets need access to these services to round out their entertainment offerings. If the Galaxy Tab 1o.1 had Hulu Plus support, I would have been able to leave my iPad alone for an entire week, which says a lot about this tablet.

Google is at the will of movie studios and app makers on this issue, but I have to think that with enough cash, Google can convince everyone involved to hurry things along. It isn’t enough these days to have one or two places to access our entertainment, or to ask users to buy every TV show they want to watch. Instead, we expect access to multiple sources of entertainment that include all you can watch packages. Android isn’t quite there as a portable entertainment device, but thanks to manufacturers and slow app improvements the OS is moving in the right direction.