Samsung has reminded us today that it’s upcoming Honeycomb tablet, the Samsung Galaxy Tab 10.1, will be in stores nationwide tomorrow with a price tag that starts at $499. 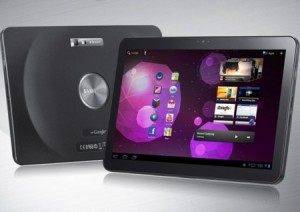 The tablet device has been on sale in New York’s Union Square Best Buy for a few days now but it hasn’t been available to the rest of the United States. Tomorrow though is launch day and those looking to get the new and improved Galaxy Tab will have the opportunity to cough up five crisp Benjamins for a 16GB version of the device if they so choose.

If you want more storage, Sammy also will have a 32GB flavored device available for purchase but the price tag is going to be a little steeper. It will sit at $599. Remember, these are Wi-Fi only, so they don’t require a contract. These are flat fees. If you’re waiting for one that’s powered by a mobile provider, you’ll want to take a look at Verizon’s 4G LTE model that should be out sometime in July.

For those interested, here is a quick remind of what’s on board the Galaxy Tab 10.1. It’s going to have a 10.1-inch enhanced display with a1280x800 resolution HD screen, 1 GHz dual core application processor, a 2-megapixel front-facing camera and a 3-megapixel rear-facing camera.

It’ll also run Android 3.1 Honeycomb, Google’s latest version of the software, right out of the box.