The Samsung Galaxy Tab 2 10.1 Android 4.1.1 Jelly Bean update has started rolling out today for the Wi-Fi only version of the device and the start of what is likely a massive roll out to regions all over the world.

SamMobile confirmed today that the Galaxy Tab 2 10.1 Jelly Bean update is indeed pushing out today though at the moment, it appears to limited to owners living inside the borders of the United Kingdom. Samsung has not said when other regions might see the Android 4.1.1 update roll out though we suspect, given the company’s past with major Android updates, other regions won’t be too far behind.

Those who are looking to upgrade their device from Android 4.0 Ice Cream Sandwich to Android 4.1.1 Jelly Bean will have two options as far as installing the update goes. 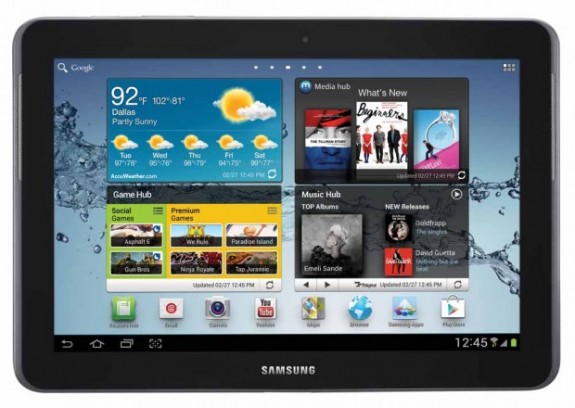 The Galaxy Tab 2 10.1 Jelly Bean update has started its roll out.

The first option is to wait for it to arrive OTA or Over-the-Air. This option is a bit slow but is the least painful. Simply head into the device’s Settings, go into the About section and check for an update. If it has arrived, there will be a prompt that asks for start the download and installation process. If there is no prompt, then owners must wait or else go the second route which is through Samsung Kies. Samsung Kies is a piece of software that will help deliver the update through a computer. It’s a manual install process and can be frustrating, but it’s a much faster way to get the update.

Once the installation process is done, Android 4.1.1 Jelly Bean will be the on-board operating system. It’s a huge upgrade over Android 4.0 ICS in that it brings a host of useful features and improvements to the tablet.

Many of them can be seen in the video below.

So, the roll out for the Galaxy Tab 2 10.1 has begun in the United Kingdom and it shouldn’t be long before Jelly Bean starts hitting other Galaxy Tab 2 10.1’s around the world, including the Wi-Fi only model found in the U.S.

Those who own the device on a specific carrier likely won’t see the update roll out any time soon. Carriers often drag when updating their devices and we don’t see anything different happening here.