The last we heard from the Samsung Galaxy Tab 7.7 was back in September when we went hands-on with it at IFA, loved it, and then shortly afterward learned that there was a distinct possibility that it might not come to the United States. Turns out, it might be. The Galaxy Tab 7.7 has cruised through the FCC complete with bands used by U.S. carrier, AT&T.

The FCC tests also show that the Samsung Galaxy 7.7 has support for HSPA+ speeds which means it will be a quasi-4G tablet once it arrives. It also won approval for Bluetooth 3.0 and dual-band 802.11 b/g/n.

Unfortunately, FCC tests don’t reveal anything official in regards to a release date or pricing but now that it has passed this test, we’d imagine that we should get some details at some point soon. 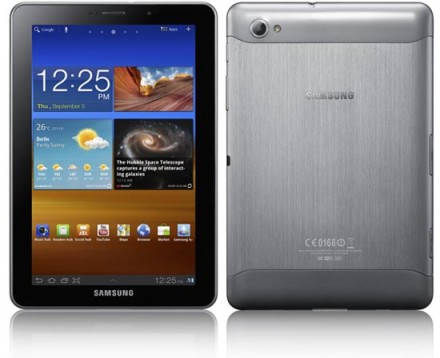 So, if you live in the U.S. and you have been hoping and praying for the Galaxy Tab 7.7’s arrival, it looks like you’re in luck.

The ball is in your court, AT&T.