Back in December, we heard that Verizon would be picking up the Samsung Galaxy Tab 7.7 for Verizon’s 4G LTE network and today, the carrier made that official. Big Red has confirmed that the tablet will be headed to shelves in the coming weeks, although it failed to give the tablet a firm release date or pricing.

The Galaxy Tab 7.7 is exactly what we thought it was going to be. An Android 3.2 Honeycomb tablet that sports a 7.7-inch, thus the name, display that features high-definition 720p (1280×800) resolution.

Android 3.2 will also have Samsung’s user interface, TouchWiz, over the top of it. 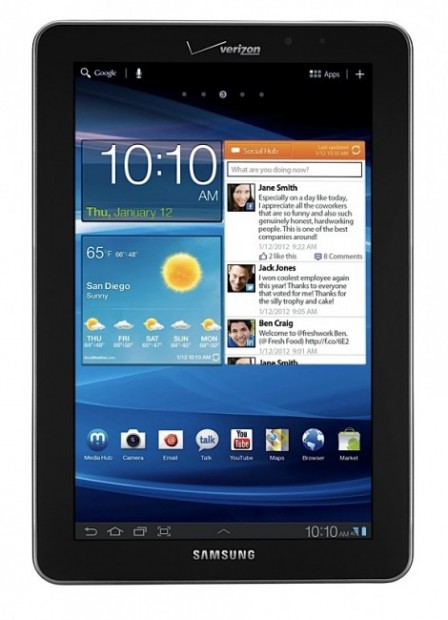 In addition, it will feature a form factor that is a mere 7.9mm in thickness – making it the thinnest 4G LTE tablet to date, as well a 1.4GHz dual-core processor tucked away inside to power it.

Other bells and whistles include:

It will also feature a bunch of accessories including a Keyboard Dock, a Multimedia Dock, a USB/SD Adapter Connection Kit, an HDTV Adapter, as well as a Book Cover Case.

Again, the carrier didn’t say when it would launch or for how much, but we expect it to reveal those details in the not-so-distant future.