Samsung Galaxy Tab 7.7 Jelly Bean Update Could Be Far Off

The Samsung Galaxy Tab 7.7 Android 4.1 Jelly Bean update, which has yet to roll out to owners of the aging tablet, could be far off as Samsung has reportedly encountered issues with the update that have pushed the release to a date that’s later than its original one. 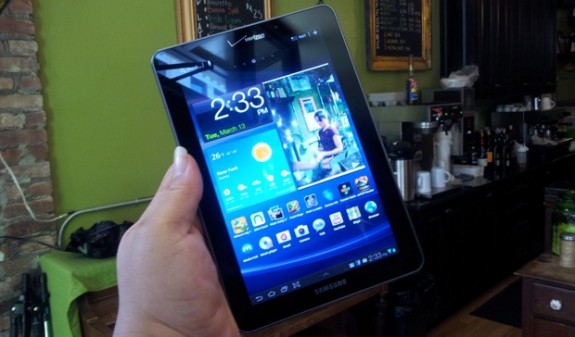 The Galaxy Tab 7.7 Jelly Bean update could be far off.

According to SamMobile, which has been accurate with information in the past, Samsung is having problems with the Samsung Galaxy Tab 7.7 Android 4.1 Jelly Bean update, the update that would succeed Ice Cream Sandwich as the device’s operating system. Specifically, the processor doesn’t appear to be cooperating. Unfortunately, there are no specifics beyond that.

Evidently, the timing for the update is May or June though that hasn’t been confirmed and it’s possible, given the issues, that the update could be even further off than that. What this means is that Android 5.0 Key Lime Pie might be out in the open by the time the Galaxy Tab 7.7 gets Jelly Bean, something that would obviously be troubling to owners as Android 4.1 will be nearly a year old by that time.

Owners of the device in the U.S. are likely looking at a lengthy wait regardless as devices in the United States typically get their updates long after devices in other regions.

It’s unclear just what those features might be but one of them could be the heralded Multi-Window View feature that allows owners to split up the display into two sections in order to run two separate applications at the same time.