As we’re approaching August 29th, a date set aside by Samsung as their official unveiling of the Galaxy S II smartphone, we’re seeing FCC filings for two un-released devices for U.S. GSM carriers AT&T and T-Mobile USA. The first device has a model number of T989 and is the Samsung Hercules, a model that’s been all but confirmed as a Galaxy S II device for T-Mobile. The FCC filing shows that the device will also come with Near Field Communications, or NFC support.

Also, a Samsung I927 was seen passing through the FCC as well and the device would be AT&T’s version of the Galaxy S II. 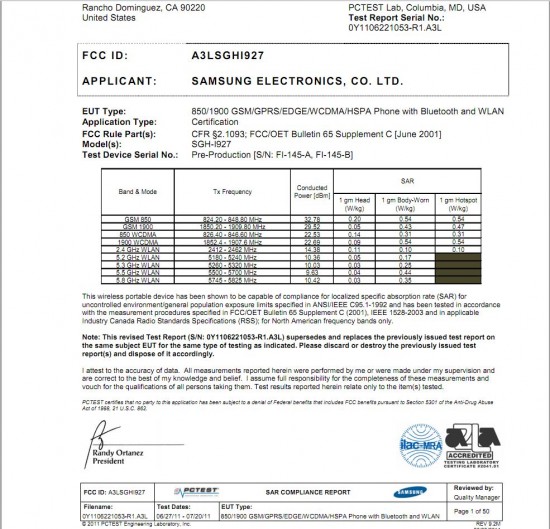 U.S. carriers often launch Samsung flagship phones under different brandings. For instance, the Galaxy S I was launched on T-Mobile as the Samsung Vibrant and the AT&T model was known as the Captivate.

The Hercules for T-Mobile USA may be launching in October.

In addition to T-Mobile  USA and AT&T, Sprint will also be carrying a Galaxy S II variant known as the Samsung Epic Touch 4G. The only major U.S. carrier without a Galaxy S II in its lineup will be Verizon Wireless, which is focusing its attention on the Motorola Droid Bionic, and perhaps the Nexus Prime in the future.