The Samsung Illusion for Verizon Wireless may be just that–an illusion–as the device may look like a high-end Galaxy S, but will be in reality an entry-level or mid-range 3G Android smartphone. The device is said to have an HVGA display, compared to the WVGA or qHD resolution of newer high-end devices, though there have been conflicting reports on whether the Illusion’s screen is actually WVGA. The screen itself is reported to be 3.5-inch and the Illusion will run TouchWiz on a processor that’s clocked between 800 MHz and 1 GHz. 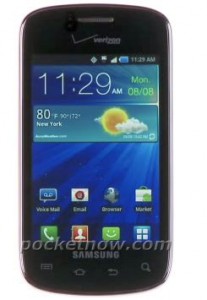 There’s not much information about the Illusion, though pocketnow did manage to get a press photo of the device. Various Internet blogs are reporting that the Illusion and the Pantech Breakout will be launching in the next few weeks, though Verizon has not announced either devices officially.

The Illusion should be a relatively affordable handset when it launches.