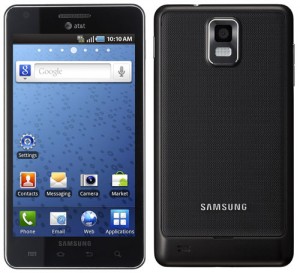 The recently announced Samsung Infuse 4G may be the first Android smartphone for AT&T to support the sideloading of apps. According to IntoMobile, the Android-based smartphone with its massive 4.5-inch capacitive touchscreen display will allow apps not purchased or downloaded through Android Market, the official Google app store for Android, to load on the device, marking a significant shift in policy for the carrier.

When AT&T had launched its first batches of Android devices some time ago, the carrier had specifically required that manufacturers restrict devices to only allow the installation of apps coming from Android Market. While other carriers often place restrictions on their Android phones, there is a toggle that users can turn on or off to install non-Android Market apps. AT&T says this is to protect customers and the devices, hinting that its position may be to help prevent the spread of malware from un-trusted sources, and the move definitely mirrors the move that AT&T partner Apple has taken with its iPhone.

However, with Amazon launching its own Amazon Appstore for Android as a huge competitor to the native Android Market, AT&T may be changing its tunes and that may be the reason why the Samsung Infuse 4G is loosening its restrictions. Amazon has stated in the past that it is working with AT&T to allow AT&T subscribers to download its appstore and get apps purchased from Amazon Appstore for Android onto AT&T Android devices.

In order to even get Amazon’s Appstore for Android onto an Android device, users would need to visit Amazon and enter in their email address to be forwarded a download link for the Amazon Appstore app. After the download, the app would install, which would have been prevented by older Android devices on AT&T with the restriction against third-party apps not originating from Android Market.

The move is a welcomed one among power Android users on AT&T. However, it does place the responsibility on users to download apps that are from trusted websites or sources if they do venture far away from Android Market and from Amazon Appstore.