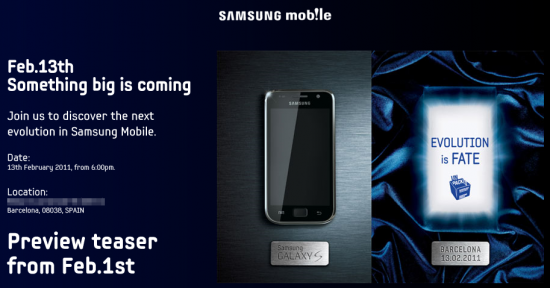 At its teaser site for Samsung’s CTIA press event where the Galaxy S smartphone was unveiled, Android Central is reporting that the page has been updated to reflect a February 13th event for Mobile World Congress in Barcelona. Not a lot of details were garnered from the site, except that “Something big is coming” and that “Evolution is fate” with an image and reference to the Galaxy S.

The phone-maker is widely believed to be announcing an update to its wildly popular Galaxy S series Android smartphone at MWC. Android Central did check in with Samsung and the company says that there will be another MWC event that will be catered to the U.S. demographic. Whether that event will show off variants of the “evolved” Galaxy S for the U.S. carriers is unknown; the first generation of Galaxy S smartphones is available as variants on all four national carriers as the AT&T Captivate, Sprint Epic 4G, T-Mobile Vibrant, and Verizon Wireless Fascinate.

The original Galaxy S debuted Samsung’s Super AMOLED screen technology. However, more recently at CES, Samsung had announced a few phones with partner carriers that utilize the more advanced Super AMOLED Plus display. It could be possible that the newer next-generation evolved Galaxy S will sport the same display.