According to a leaked user agent string, T-Mobile USA may soon debut a Samsung-made device with the model number of SGH-T879. Though neither Samsung nor T-Mobile USA has announced what that device is or any other information about the device, there are some that are speculating that this will be the nation’s fourth largest carrier’s variant of the Samsung Galaxy Note, which so far has only appeared on AT&T’s U.S. network. 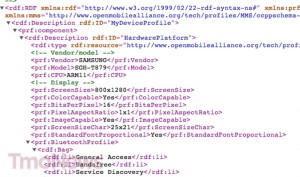 There are several indications that this device will be a Galaxy Note. According to TmoNews, the resolution that’s being listed is 800 X 1280, which is typically reserved for smartphones whereas tablets are often described as 1280 X 800. As such, Samsung only has one smartphone in its arsenal with the 800 X 1280 resolution. Second, the Bluetooth Special Interest Group and Wi-Fi Alliance have both listed the device as a phone, which should remove any doubts that it is a Samsung tablet. And finally, the user agent string spotted as the same as that which was discovered for the AT&T Galaxy Note.

While the AT&T Galaxy Note operates on AT&T’s 4G HSPA+ and 4G LTE network, the T-Mobile-bound Galaxy Note would be confined to T-Mobile’s 4G HSPA+ network as T-Mobile USA does not yet have an LTE network deployed.

At this point, it’s still very much uncertain that this device will be a Galaxy Note for T-Mobile as the device could in fact turn up to be another Android tablet from Samsung. However, given that AT&T’s exclusivity on the phone ends this month and Samsung’s continued push for the 5.3-inch form factor along with the S-Pen, this could be a big hit for T-Mobile customers.

The device has also been rumored to be coming to Sprint’s Now Network in the past.