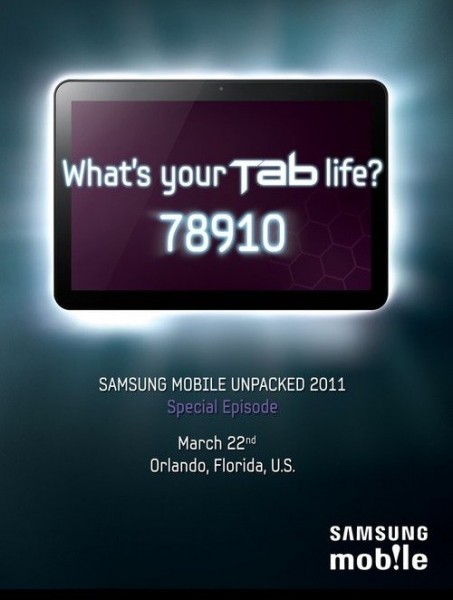 According to a leaked press invitation, Samsung may be set to introduce an 8.9-inch Galaxy Tab at the CTIA conference in Orlando, Florida on March 22. The invitation reads, “What’s your Tab life,” followed by a series of numbers, “78910,” which could indicate screen sizes for the various Android tablets in the Galaxy Tab lineup.

Since Samsung had already launched its 7-inch Tab, which runs Android 2.2 Froyo and Samsung’s proprietary TouchWiz UI, we may the number 7 accounted for. The company also announced just recently at Mobile World Congress a Galaxy Tab 10.1, a 10.1-inch Android 3.0 Honeycomb tablet. That leaves the 89 numbers unaccounted for, and speculation has it that those numbers suggest an 8.9-inch version of the tablet.

In the past, Samsung has said that additional tablets will be coming to the Galaxy Tab line. The company’s initial efforts at the 7-inch form factor provided customers with a more portable device than a 10-inch tablet, like those from Apple and Motorola. Apple has previously shunned the idea of a smaller tablet, stating that it doesn’t provide a good user experience. With the latest speculated 8.9-inch announcement, it looks like Samsung will have its bases covered as it has the portability of the 7-inch Tab, the refined user experience of a 10-inch slate, and also an in-between device that is less portable but not quite as large as its other offerings.

Would an 8.9-inch tablet appeal to you? Or is the tablet too close in size to a 10-inch tablet to even matter?