The success $200 of the 7-inch Nexus 7 tablet from Google, which is manufactured by partner Asus, has not only attracted attention from Apple as it reacted with its own 7.9-inch iPad mini, but now it looks like Samsung is taking notice. A new report suggests that Samsung may be prepping its own Nexus 7 competitor in the form of a new 7-inch Galaxy Tab slate that will be priced competitive.

In a post on DigiTimes, the publication is reported that new Samsung tablet would be priced between $150-$200. The Nexus 7 starts at $200 for the base model and goes up to $300 for extra storage. Though Google had cut some corners, the Nexus 7 was–and still is–a powerful slate when it was launched with quad-core processing power. It’s unclear how Samsung’s more affordable 7-inch number will stack up against the Nexus 7 in terms of usability, performance, and specs. 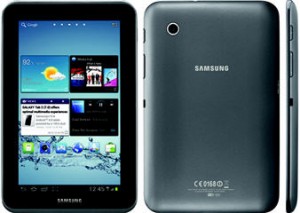 DigiTimes is bullish on Samsung’s tablet shipment. Citing that the company had shipped an estimated 15 million tablets last year, the publication is predicting that Samsung will ship as many as 40 million slates this year.

Though Samsung’s 7-inch Nexus 7 competitor may be priced cheaper, Google is also expected to introduce an updated slate that’s rumored to be made by LG in the form of the Nexus 7.7. That slate is expected to be announced at the May Google I/O conference this year and will launch with Android 5.0 Key Lime Pie out of the gate.

In addition to the 7-inch tablet, Samsung is also reported to be working on a new 8-inch and 10.1-inch tablet. The 8-inch slate may be in the form of the pen-enabled Galaxy Note 8.0, a tablet that has been often rumored and recently confirmed by Samsung. Like the Galaxy Note phablet, the Galaxy Note 8.0 would incorporate an active digitizer as well as an 8-inch display that has a 1280 X 800 resolution to compete against Apple’s iPad.