According to a report from SamMobile, Samsung is gearing up to announce a 5.8-inch device called the Samsung Galaxy Fonblet 5.8, a device that will evidently be Europe’s version of the Galaxy Player 5.8, if it was a media player. It’s looking like the Galaxy Fonblet 5.8 is actually a smartphone and not a media player. It’s model number evidently is GT-I9152 and it appears that the device will have dual-SIM support. 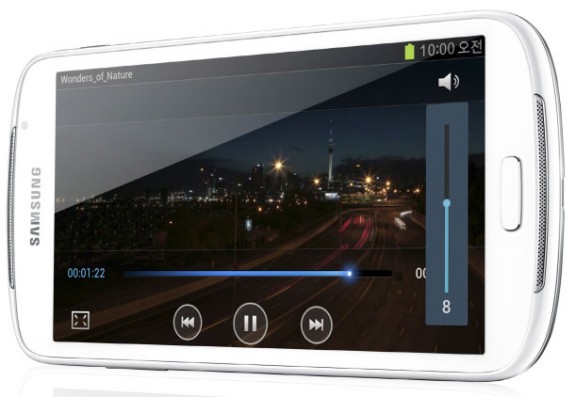 Samsung is reportedly working on a European version of the Galaxy Player 5.8. Only, it’s a smartphone not a media player.

Other details surrounding the device are scarce but it seems it might run either Android 4.1 Jelly Bean or Android 4.2 Jelly Bean and sport a white colored design. It also appears that it may just arrive in Europe only and no where else. No word on what regions might see it.

There is also no word on a release date. With Mobile World Congress coming up in February, we could see Samsung deliver this new phablet then, but without any confirmation on Samsung’s end, the device remains a rumor. We’ve reached out to Samsung about the device and thus far, it has declined to comment.

SamMobile is generally reliable so it’s certainly possible that Samsung is indeed looking to release yet another big-screened smartphone into the wild to join the Galaxy Note 2. It would be a bit strange but this could potentially be Samsung’s low-end big-screen smartphone. After all, the Galaxy Note 2 isn’t the world’s most affordable phone.

Samsung is also rumored to be coming out with another Galaxy Note at MWC 2013 in February, the Galaxy Note 8.0, and there are also rumors swirling about a possible Galaxy S4 launch at the event as well.

The Samsung Galaxy Note 3, Samsung’s rumored successor to the Galaxy Note 2, isn’t expected to arrive until later this year with a massive 6.3-inch display and a Exynos 5 Octa processor.