A new Samsung tablet with the SGH-T859 model has recently gotten WiFi certification. Little is known about the device, other than that it will support WiFi, at this time. It is known that this Samsung-made device will be a tablet, and given that it will be coming to T-Mobile, it would support GSM/HSPA+ networking capabilities for the carrier’s mobile broadband network. 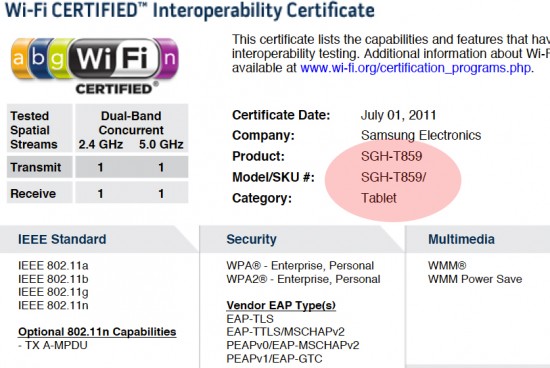 As Samsung had made it clear that it intends to release versions of the Galaxy Tab 10.1 and Galaxy Tab 8.9 tablets, the former model sports a 10.1-inch display while the latter carries an 8.9-inch screen, with built-in mobile broadband support, this SGH-T859 could be either model from Samsung. For its part, rival carrier Verizon Wireless will be offering the Galaxy Tab 10.1 with 4G LTE network support this week for sale.