We still have absolutely no idea what carrier the upcoming Samsung SHV-E120L is coming to or what its name is. What do know however is that this thing has some pretty beefy specifications which have been revealed courtesy of an image dug up by Cetizen. For those of you that love big screen smartphones, take a seat because the SHV-E120L might just be the phone you’ve been waiting on.

Apparently, this device is rocking an absolutely massive 4.7-inch HD display, the same size as HTC’s recently announced Windows Phone Mango handset, the HTC Titan. However, unlike the Titan, this Samsung model’s display is of the HD variety which means WXGA 768 x 1280 resolution. 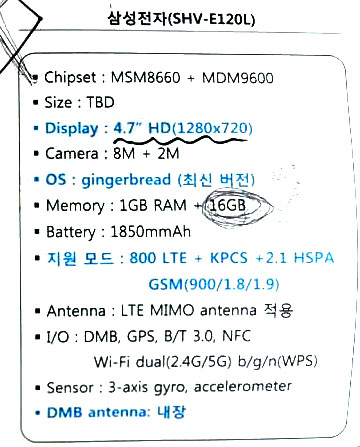 Hopefully, all of those questions and more are answered soon.