Back in May, Samsung customer Shane Bennett wrote into Samsung Canada on Facebook pleading for the Galaxy S III, even though the device was unreleased. Bennett tried to sweeten the request with a picture of a dragon. Well, what started as a drawing is now a reality as Samsung has bestowed a custom Galaxy S III upon Bennett, dragon and all.

In a post on Reddit, Shane shows off his new custom Samsung Galaxy S III, the only custom Galaxy S III that Samsung has sent out in Canada. Samsung claims that it’s a reward for the good press that Bennett brought to the company with his original request.

Before the Galaxy S III was released, Bennett decided to plead with Samsung for a Galaxy S III. He drew a dragon for Samsung which he hoped would convince them to give him one early. (He also claimed to have bought several Samsung products in the past.) 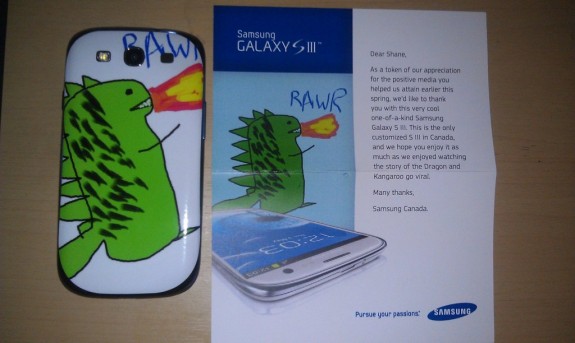 Samsung Canada’s Facebook account politely declined Bennett’s request and instead of a new Galaxy S III, gave him a photo of a kangaroo riding a unicycle. Bennett then posted the exchange on Reddit where the post went viral.

Today, he posted on Reddit again though this time, it’s of a Galaxy S III and not a Facebook exchange. Samsung decided to send Bennett a customized Galaxy S III with the picture of the dragon on it. 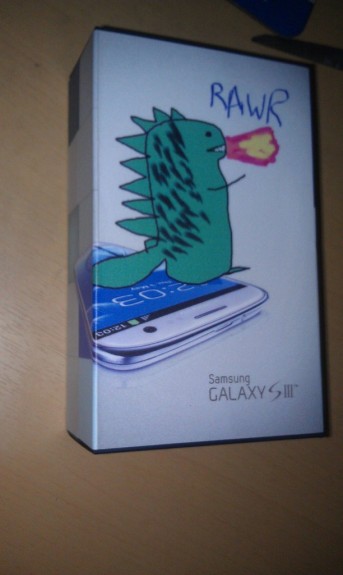 Even the box was customized.

We imagine this will likely spawn numerous other attempts at getting a customized Galaxy S III or another product from Samsung though we suspect that this is likely going to be a one time thing.

As it should be. 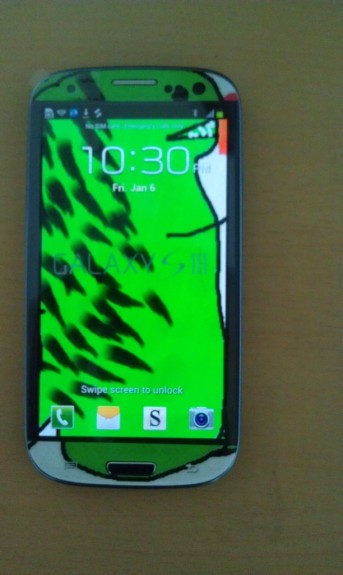 In any event, Samsung needs as much good PR as it can get right now with the Apple patent lawsuit loss and the $1 billion in damages it owes hanging over its head.