According to a leaked image of a touchscreen Android smartphone inside Samsung’s test lab, the South Korean smartphone manufacturer may be working on a device with 3 GB RAM, which will help applications run smoother and allow users to multitask with aplomb. Just several years ago, 1 GB of RAM was considered the best for ‘high end’ devices and more recently, the standard has moved to 2 GB. 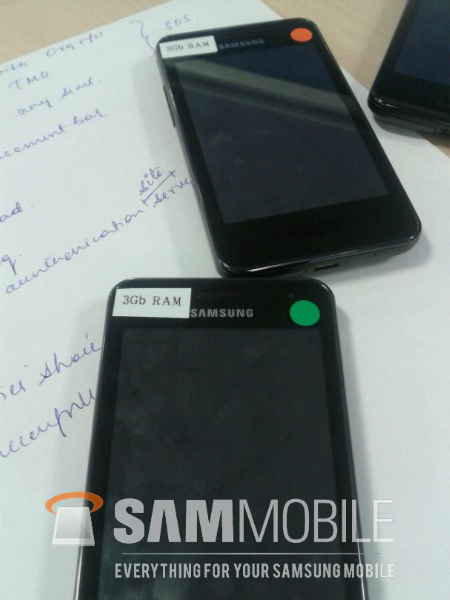 The picture posted on Sam Mobile has a device that has a sticker with 3 GB of RAM on it. Additionally, according to that publication’s source, the sticker is accurate and the device is expected to be released sometime in 2013.The Samsung Galaxy S III was one of the first popular devices to come with 2 GB of RAM. Given the release timing on this device, perhaps it will be a Galaxy S IV with 3 GB of RAM?

A Galaxy S IV was recently rumored for a debut at Mobile World Congress in early 2013, but Samsung quickly dismissed those rumors stating that it would not have the device ready in time.

Unlike recent Galaxy S III and Galaxy Note II devices, this Samsung device does not a physical home button. Instead, the button-less design may mean that Samsung is either conforming to Google’s Android design strategy or the device may be part of Google’s Nexus program.