With IFA scheduled for the end of this month in Berlin, Germany, a Galaxy Note 2 announcement is expected as that trade show was the launch date for the original Galaxy Note 5.3-inch phablet last year. However, it seems that Samsung may have plans to launch a smart camera as well at that conference. A Samsung-made smart camera running on Google’s mobile Android operating system has been long rumored, and Samsung’s announcement would trail Nikon’s smart camera announcement earlier this month. 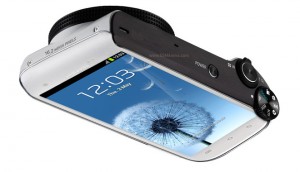 It’s unclear if the Super AMOLED display will be the same HD resolution that is found on the current generation Galaxy S III flagship smartphone, which has a display of comparable size. The camera is said to be similar to a Galaxy S III, but about 1.5- to 2 times thicker than the Galaxy S III in order to accommodate the 10X zoom. The camera has a 16-megapixel sensor and the 10X zoom is comparable to Nikon’s announced offering. There will also be a pop-out Xenon flash as well.

It is speculated that Samsung is in talks with various carriers to either deliver a WiFi-only or WiFi+3G data model. The camera will not support voice so it will remain a smart camera, rather than a smartphone with advanced imaging like rival Nokia’s 808 PureView model.

GSM Arena is reporting that the camera will see an IFA announcement in the coming weeks from an unnamed tipster.