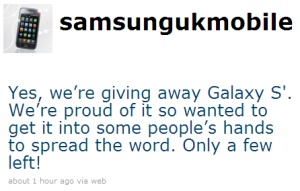 Whereas Apple, Google and soon Microsoft have gone the “dog food” approach to seeding their smartphones, Samsung UK is getting their Galaxy S into the market by giving them away to frustrated iPhone users they find on Twitter. Completely brilliant.

A giveaway is always a great way to drum up interest and get your new product into people’s hands. Not only does it break the ice between would-be customers and unknown products, but in the vicious smartphone market, it’s pretty much necessary to get their products seeded and in circulation. But Samsung UK is taking it to a level above that.

By seeking out “seeders” on Twitter, Samsung builds a following on this social network. By specifically reaching out to Twitterers who are expressing frustration with their iPhones, they punch their top competitor right in the baby maker and encourage others to complain about their iPhones without directly inciting such complaints. It’s tacky to tell people to bad mouth the competition, but Samsung UK isn’t telling anyone to do that. They’re just letting people make that inference.

Genius marketing work by Samsung UK, and in a turnabout that should please some people, it appears this giveaway is UK-only, i.e., not for us here in the States. Boo!