What if your doorbell alerted you to the activity going on right outside your front door? Imagine knowing who wants you to unlock your deadbolt at midnight before you get off your couch.  That’s what the Samsung Wisenet SmartCam D1 promises homeowners.

On paper, the Wisenet SmartCam D1 is the ultimate doorbell. Like a regular doorbell, it connects to a chime inside your home and alerts you whenever waiting for you at the front door. Unlike your existing doorbell, it also connects to a smartphone app that sends you an alert when someone is at the door. If you decide that you can’t be bothered to come to the door, a built-in 2-megapixel camera and speaker let you communicate with whoever is outside and tell them to go away. 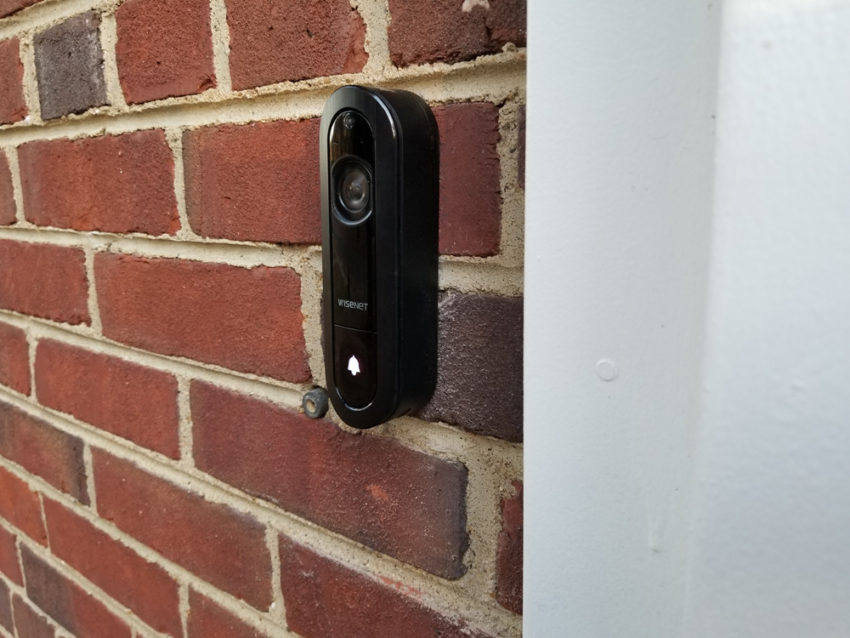 If all these conveniences sound interesting to you, definitely consider getting a smart doorbell. Just, don’t buy the Wisenet SmartCam D1, even if you find it well below its $249.99 price tag. To justify their place in your home, a smart home product must work reliably. This one doesn’t yet.

Setting Up the Wisenet SmartCam D1

Once you’ve wired the SmartCam up and connected the included power regulator for your doorbell chime, it’s time to get the device connected to a SmartCam account and your smartphone. That’s where things first took a bad turn for me. I spent three hours trying to connect SmartCam D1 to the SmartCam+ app for iPhone and Android that it relies on. Account creation went just fine, but I couldn’t get the doorbell to link to my account. I’d get to the Wi-Fi set up, then have the set up fail and start the process over. As it’s a weatherproof doorbell outside the house, I tried boosting the Wi-Fi signal with an extender so that it reached well beyond my front door, thinking my signal was unreliable. That didn’t work either.

It took a week and two support calls with Samsung to get the SmartCam D1 working and syncing with my account. A small link at the bottom of the app’s set up routine allowed me to bypass registering the camera to my account the normal way.

After the support call that finally got it working, I attached one of the three different colored faceplates the camera includes and started configuring it.

I spent an hour toggling settings, adding pictures of people who frequently visit my home and getting everything just right. Then, I invited a few people over, expecting to really test the facial recognition features. The camera also detects screams, sirens and breaking glass, according to Samsung. 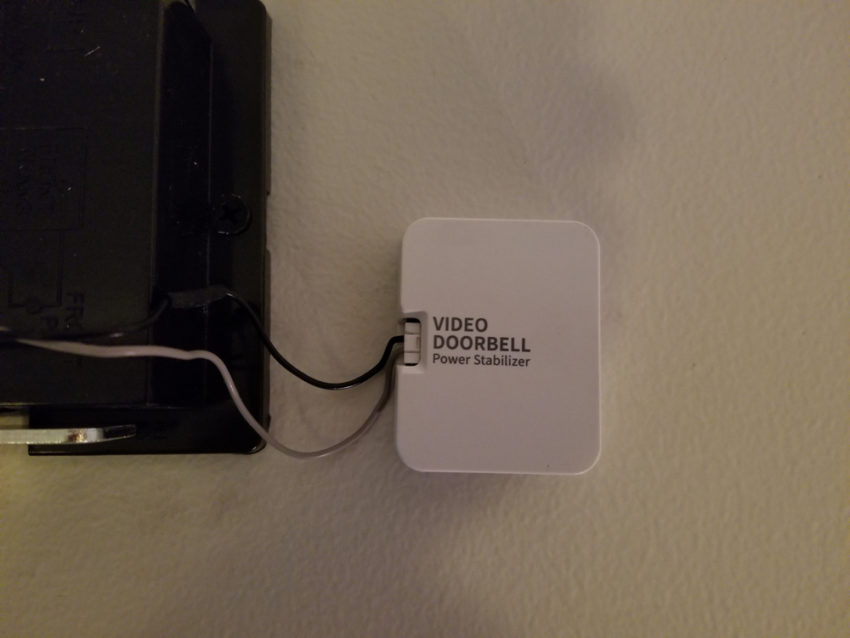 The first person arrived, but I didn’t know because my smartphone was in another room. By the time the fourth person resorted to knocking on the door I realized the doorbell and the power regulator that it includes weren’t ringing my new analog door chime. No matter, I would just carry my phone until I could get the electrician that added the analog chime to come back and take a look.

Smartphone notifications worked well. The delay that I’d expected between the time someone pushed the doorbell’s glowing button and I got a notification on my phone was minuscule.

The true brilliance of the Wisenet SmartCam D1 is that it has enough sensors to let you do more than just know when someone is at your front door. It tells you who is there and lets you communicate directly with anyone that you don’t recognize.

Three days after I got the doorbell installed, I took advantage of these features. They worked just as advertised. Without getting off my couch, I politely rejected an ADT sales person’s pitch to install a home security system at a discounted rate by talking to him through the app. The SmartCam D1 has excellent quality video, with options to switch to high-definition if you need to or stay at a lower resolution if you’d like the stream to load faster and stay stable longer. 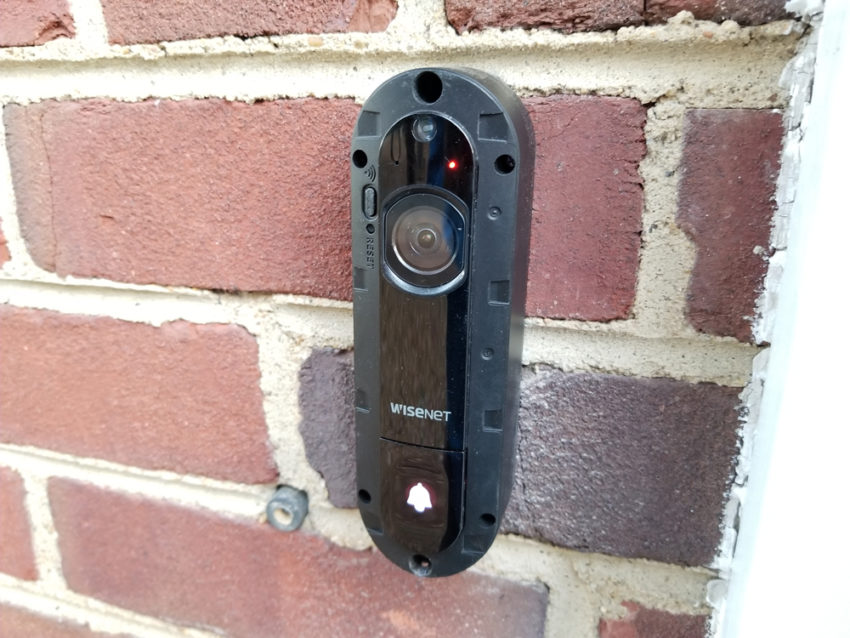 For another three days, I watched from my smartphone as people walked past my front door thanks to presence detection. I liked getting the alerts for anyone that got too close to the house, but realized the app had controls for narrowing its detection zone. Betting that these alerts would get annoying after a while, I narrowed the field of the presence detection and kept enjoying the doorbell. Again, everything worked as it should. SmartCam’s Cloud DVR lets you keep thirty days worth of camera activity from the SmartCam D1 for $4.99 a month. It also unlocks cloud zones, which let you specifically track things that happen in a certain area. These zones allow you to better tune detection and eliminate all the extra alerts the app can sents without fine-tuning.

Past events surface in a timeline on the SmartCam+. This too worked well, though the app would sometimes take a half-minute to begin playing video stored on the SmartCam service. 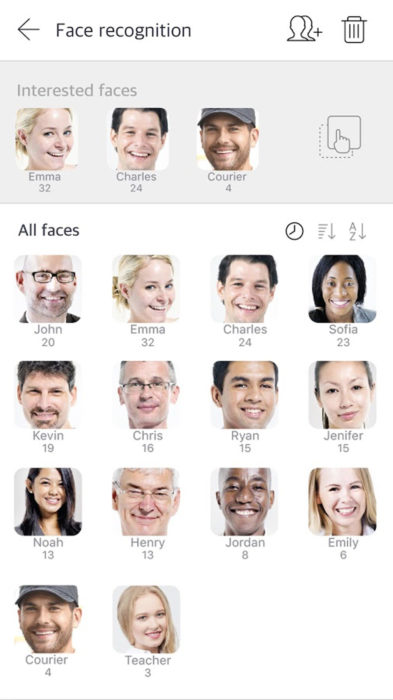 You use pictures to add face recognition to the SmartCam D1 through its dedicated app.

By day seven, my love affair with the Samsung Wisenet SmartCam D1 was starting to fade and it was all due to the instability of the SmartCam+ app for Android. While trying to turn off the camera’s status light, which screams “I’m watching you” to anyone standing on the sidewalk, the app crashed. Force closing the app and opening it again fixed the issue only for it to return a few hours later. Frustrated, I left the app alone to focus on other projects.

By day eleven, I realized my brother had taken to announcing his arrivals by talking through my front door’s mail slot. When I asked him why, he said the SmartCam D1 didn’t appear to be doing anything. He’d pushed the button and heard a chime outside but he didn’t think I was getting alerts on my phone because he’d stood there for ten minutes the previous night. I pulled my Samsung Galaxy S8+ from my pocket and looked for notifications I’d missed. There weren’t any. I went outside and starting the setup process again.

On my last day with the Wisenet SmartCam D1, I opened the app to see if there was someone standing at my door because I thought I heard a knock there. The SmartCam D1 I’d previously registered with my account, which had worked for days correctly, had suddenly stopped working. Not only was it not sending notifications and chimes, I couldn’t watch HD video or existing footage from the camera. 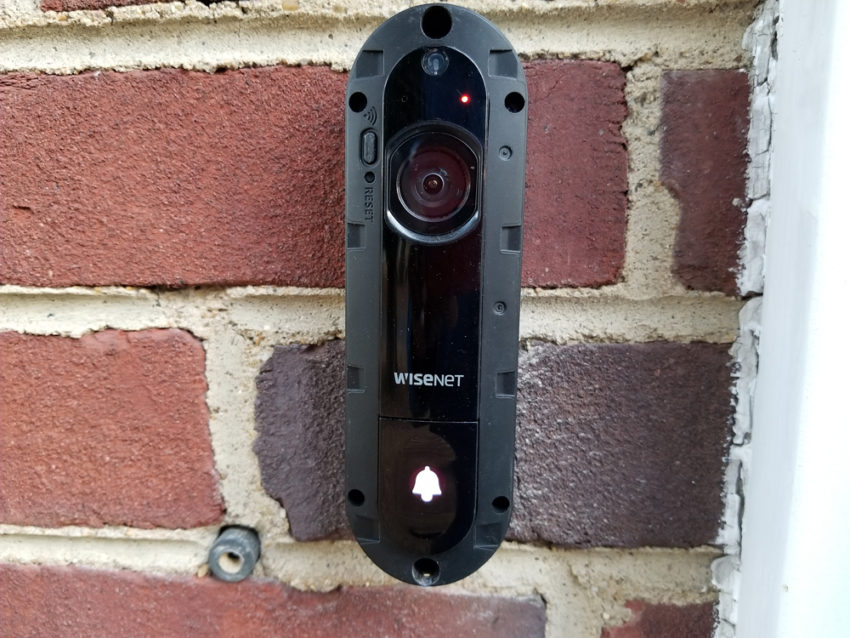 The Wisenet SmartCam D1 has reset and Wi-Fi buttons hidden underneath its removable bezels.

I thought I could reset the camera using the button hidden underneath its bezel and that should get it working again, but it didn’t. To make matters worse, the electrician who installed the analog chime specifically for the SmartCam D1 was back with bad news. He’d wired everything correctly, but the power regulator that came with the device wasn’t producing enough power to hit the chime.

My experience with the Wisenet SmartCam D1 had ended. Despite three phone calls to technical support and running the setup process so many times that I could do it from memory, I just couldn’t get the camera and app to work together again. SmartCam+ could see the camera, but the camera refused to see my Wi-Fi network, despite using that same network for days. App reviews on the Google Play Store and iTunes App Store indicate that connectivity and app stability are problems for more than just me.

Should You Buy the Wisenet SmartCam D1? 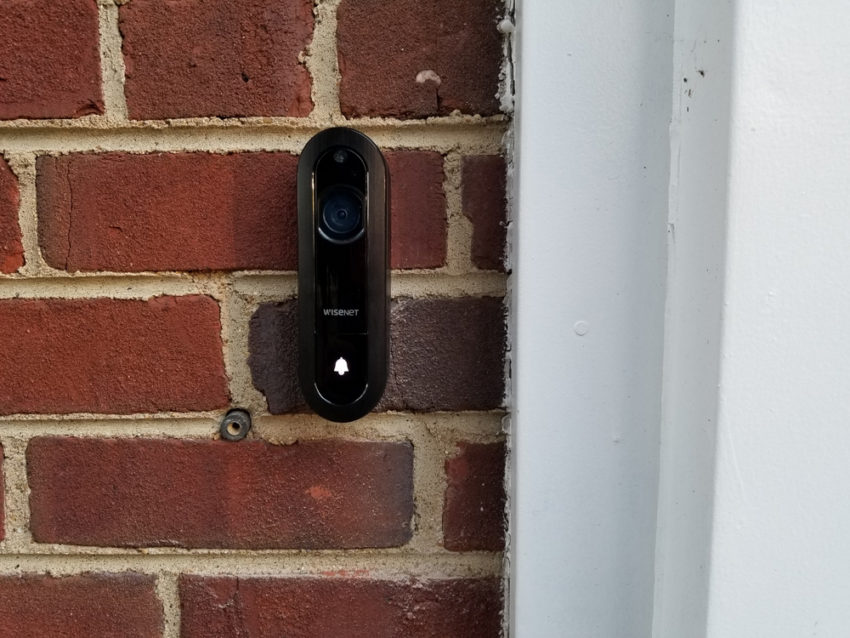 If the Samsung Wisenet SmartCam D1 ever gets a correctly working SmartCam+ app experience, it wouldn’t be a terrible thing to invest in. Using an app to see who is at your front door is convenient and the facial detection does work. The camera is solid, and its night vision is equally good. I really don’t see a problem with the hardware here.

However, this is not a product I can recommend to anyone today because the app and service that it relies on aren’t very good. The camera frequently stops connecting to your account without explanation. Sometimes the app would connect to the camera but still not deliver a notification. It forgets networks without warning.

The Wisenet SmartCam D1 just isn’t as reliable as a smart home product needs must be for you to rely on it day after day.