Samsung is reported to be prepping for a launch of an Android-powered notebook, or ‘AndroidBook’ as the devices are now dubbed, for launch in the next few months. There has been speculations recently that Google and its partners are working to bring the power of the Android operating system to the clamshell notebook or laptop form factor, but those efforts won’t debut in time for the Google I/O developer conference that’s scheduled for this week as the launch of the next-generation Android 5.0 operating system has been delayed. Samsung will try to get a jump start ahead of the Android 5.0 AndroidBook push by launching its own model in advance of Google’s debut of Android 5.0.

If this intelligence is correct, that means that Google will have two competing operating systems in the notebook form factor that could make it confusing for consumers. Google already has Chrome OS that’s powering current generations of Chromebooks, and an AndroidBook would definitely compete in this same segment. In the past, when asked if the Internet search giant intends on bringing its Chrome OS to tablets, the company had stated that Android was specifically designed for phones and tablets while Chrome OS was for the keyboard and mouse form factor. That said, the lines are blurring recently if an AndroidBook is in the works and with Chrome code referencing tablet features like screen rotation. 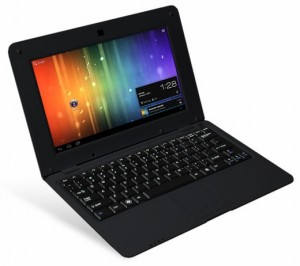 Android Book – Android Book won’t be introduced at the upcoming Google I/O as development of Android 5.0, which is targeted at NB, is incomplete. We think Android Book featuring Android.4x will be rolled out in the coming 3-4 months because some brand vendors, like Samsung (Korea), want to move first. But shipments will be limited as the current Android OS isn’t well supported for laptops.

9to5 Google is reporting that Samsung will be jumping the gun by introducing its AndroidBook with Android 4.x Jelly Bean rather than Android 5.0 Key Lime Pie. This news gives us a few things to digest.

First, Android 5.0’s main feature will be better support for keyboard and mouse form factors that are mainly used by clamshell notebooks. This means that Android 3.0 Honeycomb debuted the first tablet support for the OS, Android 4.0 unified tablet and smartphone platforms, and now Android 5.0 will introduce the first support for notebooks.

Second, this isn’t the first time that Samsung has jumped the gun. After Apple had debuted the original first generation iPad, Samsung quickly introduced a Samsung Galaxy Tab 7 slate that introduced a portable form factor and voice calling for international markets. Google reacted negatively to Samsung’s over-enthusiasm for the tablet market by saying that Android, at that time, wasn’t made for tablets. All was patched between the two companies when Google debuted Android 3.0 and Samsung had moved on to introduce the Galaxy Tab 10.1. It seems that Samsung is moving faster than Google with the AndroidBook form factor once again if it jumps the gun and launches its own hardware efforts ahead of the Android 5.0 release.

This shouldn’t be too surprising given that Intel had hinted that sub-$200 notebooks and tablets are arriving on the market with its new, more powerful, and energy efficient Atom processor.

According to KGI Securities analyst Ming-Chi Kuo, an updated Nexus 7 will be the headline of the Google I/O show. However, Google and its partners are working behind the scenes on new products, including an AndroidBook, a smartwatch, and an Apple TV competitor.