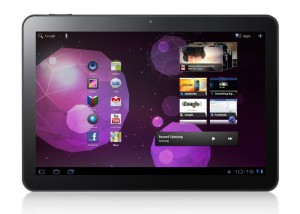 American Airlines has announced that it will be using about 6,000 Samsung Galaxy Tab 10.1 Android Honeycomb tablets on its planes for in-flight entertainment in premium cabins on long distance flights. The tablets, though similar to the consumer tablets that users can get at Best Buy, will be slightly altered to fit the needs of the carrier, including expanded memory, perhaps to store more programming and movies.

The airline only said that the cabin upgrade will occur by the end of the year for all mentioned flights. A Mashable report on Forbes says that the airline had already begun offering the tablets earlier this month.

Airlines are looking at new ways to entertain customers and deliver value to its high-paying flyers. Qantas had trialed Apple’s iOS-powered iPad on its flight in a similar strategy.

The new Galaxy Tab will replace American Airlines current entertain system on flights. The advantage of utilizing the Tab is that updates can more easily be deployed and the airline can also entertain its passengers with added content, like games, books, and music.  Additionally, the tablets may be more easy and cost-effective to replace if damaged than traditional in-flight entertainment systems.