It looks like as intelligent as voice-activated personal assistants on a mobile are today, they are not nearly as sophisticated enough to intelligently propagate the agendas of their creators. In the past, Apple’s Siri, which is found on the iPhone 4S, made an error that was atypical of Apple. When users had asked the smart assistant what the best smartphone is, Siri responded that it was the rival Nokia Lumia using Microsoft’s competing Windows Phone mobile OS. Now, Samsung, which is trying to replicate the Siri experience on its Galaxy S III flagship smartphone on Android, is apparently finding out that S-Voice may be following a little too close in Siri’s footsteps.

When users are now asking Samsung’s S-Voice what the best smartphone is, S-Voice seems to think it’s the HTC Trophy according to a report published on WMPU. That device, too, is running on Microsoft’s Windows Phone platform rather than the Android OS that the Galaxy S III operates. 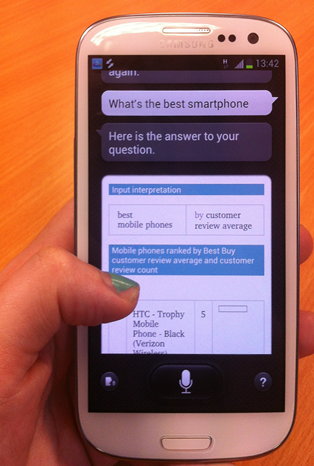 The reasoning behind this is that the HTC Trophy has the highest ratings on Best Buy’s website, which is presumably what S-Voice factors in when deciding ‘the best’ smartphone.

Apple had subsequently corrected Siri’s answer to the best smartphone by saying ‘it’s the one you’re holding,’ referring to the iPhone 4S. It’s unclear if Samsung will also correct S-Voice to heralding its own product as being the best.

For now, it seems that voice assistants need to be a little more intelligent, a lot more knowledgeable, and a bit more tactful to its creators’ wishes.