Corning’s Gorilla Glass has been all the rage in a market dominated by growing smartphone touchscreen displays with its scratch-resistant and break-resistant properties, but there’s something even better. Also known generically as chemically strengthened glass, Gorilla Glass has surprisingly built up a brand reputation for itself among consumers who seek out a smartphone or tablet with a display durable enough to last them for at least their two-year contract. However, there is an even more premium material that’s virtually unbreakable, and that’s sapphire glass.

Sapphire glass has been used in the past in high-end watches and in Vertu‘s smartphones. One of the strongest minerals on earth, sapphire glass is only scratchable with a diamond. It’s the second strongest compound on earth, second only to diamond.

And given that its a rare mineral, sapphire glass, whose aluminum oxide property is the same in costlier sapphire jewelry, known for its blue hue, has been restricted to premium and luxury items in the past.

Fortunately, there is now synthetically grown sapphire, which is created in high temperature ovens rather than in the earth’s core. This means that prices for sapphire glass is dropping and potentially the synthetic sapphires can be used on a premium or flagship smartphone. This means that your smartphone display would be even less prone to scratching and would be able to withstand drops better than today’s Gorilla Glass. It’s described to be about 2.5 to 3 times stronger than Gorilla Glass.

Sapphire glass was shown on an iPhone 5 where the sapphire layer was bonded with a transparent glue to the iPhone 5’s Gorilla Glass. When the CNET team visited Barcelona for Mobile World Congress and got a demo of the synthetically created mineral, they were able to grind a piece of concrete against the sapphire glass on the iPhone. The result? The sapphire didn’t hurt but the concrete took a beating and a fine powder of concrete was found: 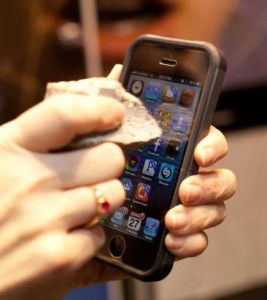 Most of the time, the only result was a building layer of concrete powder that coats the screen, but wipes away clean. One time a tiny nugget of concrete did break from the chunk and stick to the sapphire display. I thought perhaps it was embedded, but it flicked away without any noticeable nicks or indentations. Next to it in the demo, a sheet of Gorilla Glass collected scratches.

And while sapphire glass prices are dropping with the ability to create the material synthetically, it could only still be made in very limited quantities. This means that other than maybe a few flagship phones, it won’t be permeating the entire mobile space anytime soon.

That’s definitely not enough to saturate the smartphone market, but other applications may include Google Glass, or even the iWatch and Galaxy Watch. Wearable computing devices may take a bigger beating than a smartphone, which is typically covered in a pocket or purse, and where users can use a case or protective sleeves. The iWatch, for example, on the other hand, is always exposed and you can’t sheath your watch in a case making the stronger sapphire display well worth it.

Sapphire is already presently used on the iPhone 5, albeit in very limited volume. The mineral compound is used as the rear lens cover for the iPhone’s 8-megapixel camera.