The war of ecosystems may have shifted between the battle for screen real estate especially where the two dominant mobile operating systems are concerned. With iOS having historically used the 3.5-inch display form factor since inception, Android has grown to larger screen sizes and it’s a trend that we anticipate to continue. While 4.3-inch was the norm when Verizon released its first batch of 4G LTE devices, we’re seeing an increasing number of devices pushing beyond the 4.3-inch size, a move that started with the Samsung-made Google Galaxy Nexus smartphone, which broke the mold with its 4.65-inch display.

There have been two camps where it comes to screen size. On one hand, there’s Apple, which had stuck with the 3.5-inch form factor–if you need anything larger, get an iPad. Apple’s position is that with a 3.5- to 4-inch display, users can comfortably manipulate and operate the device with one hand, resting the iPhone in their palm and using their thumb to reach from corner to corner. 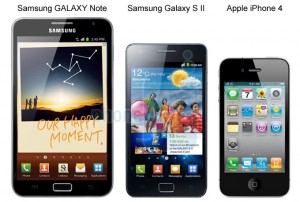 On the other hand, on Android phones, it’s extremely difficult to find a slim and powerful high-end device with a 4-inch screen or less. Almost all high-end Android phones today measure at least 4.3-inch with the exception of Motorola’s Droid 4, which has the specs of the Droid RAZR in a 4-inch package, but that device has a well-made keyboard that does add to the thickness of the overall package.

Since the Galaxy Nexus was introduced, we’ve seen the LG Nitro HD and LG Spectrum released with a 720p HD display that measures 4.5-inch. The HTC One X was introduced at Mobile World Congress with a 4.7-inch HD resolution display. And most recently, the Motorola-made Droid Fighter appears to have a 4.6-inch HD display that apes the Droid RAZR’s 4.3-inch panel.

And beyond traditional smartphones, Samsung’s pushing the boundaries further with devices that straddle the phone and tablet market, with the Galaxy Note featuring a 5.3-inch HD display and LG debuted the Optimus Vu at Mobile World Congress with a similar 5-inch ‘phablet’ device with a 5-inch display and a 4:3 aspect ratio.

And even beyond Android and iOS, the polarizing screen size debate has even affected Windows Phone. Nokia, which made a more compact Nokia Lumia 800, created the Nokia Lumia 900 with a larger 4.3-inch display that it says was specifically designed with the U.S. market in mind where bigger is better. The company says that it is watching the smartphone space closely to see if it will offer other models with larger screen sizes, a strategy that Samsung’s headlining right now.

With Android pushing for bigger, as we’ve seen, and iPhone potentially going to maintain its 3.5-inch display or possibly going to 4-inch with the iPhone 5, it may become less of a war between ecosystems and turn into a battle of screen size. There are passionate users who prefer a 4-inch display on Android but haven’t found a device that fits them while there are potential iOS users who have not bought into Apple’s ecosystem because the screen size is too small. Apple has historically only offered a one size fits all route when it comes to phone models whereas Android manufacturers have traditionally flooded the market with devices of varying sizes and style. In a move to be more competitive and cost efficient, Android hardware-makers are now slowly starting to adopt Apple’s approach with fewer designs that will make an impact so our choices in the future may be even further limited.