Senator Claire McCaskill is beginning to draft legislation that challenges the Federal Aviation Administration’s current policy on banning the use of electronic devices during takeoffs and landings. In a public letter to the FAA, McCaskill says, “Simply put, electronic devices that are currently allowed above 10,000 feet should be allowed for use during all phases of flight,” adding that “it is preposterous to think that an e-reader in a passenger’s hands during takeoff is anymore a threat to other passengers or crew members than a hardback book.” 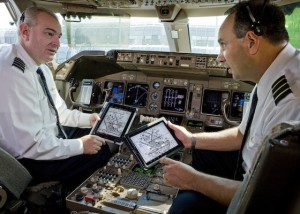 In addition to Senator McCaskill, The Verge reports that the FCC has recently urged the FAA to allow the use of electronics during takeoff and landing. Late last year, FCC chairman Julius Genachowski had written to the FAA to urge changes in policy and the agency had formed an Aviation Rules Committee to evaluate its policies in August of last year. The committee’s decision will arrive by summer, but McCaskill says that far more needs to be done.

Loosening the rules would allow devices like tablets, e-readers, iPods, laptops, and netbooks to be used during the takeoff or landing period. Under current regulations, those devices are required to be turned completely off when a plane is under 10,000 feet in the air. The aviation agency claims that the use of electronic products and gadgets may interfere with flight equipment during takeoff and landing, though approved pilots may use tablets–such as Apple’s iPad–during these critical periods as flight manuals.

Non-electronic materials, such as magazines, books, and periodicals can be used by a passenger in print form.

Though safety is still the driving force behind FAA rules, especially after the incidents of 9/11, in recent years there have been changes to FAA policies. For instance, WiFi access is now allowed on a plane, and customers on a number of flights can connect to either a free or paid WiFi connection in-flight to access the Internet. McCaskill says that her proposed legislation would not include the use of cellular equipment and voice communications, but rather to extend the use of currently approved electronics to be used during the takeoff and landing period.

McCaskill says that her bill will be drafted with stakeholder input and she hopes to call a bipartisan effort to look into the matter.