Shadowrun Returns, the latest video game adaption set in the Shadowrun cyberpunk universe will come to the iPad, Android, PC and Mac on July 25.

Started as a Kickstarter project last year Shadowrun Returns is an attempt to make a cyberpunk game as great as the acclaimed Super Nintendo Shadowrun game. The new game is an isometric turn-based RPG that’s based on the Shadowrun pen-and-paper RPG, unlike the 2007 shooter set in the universe. 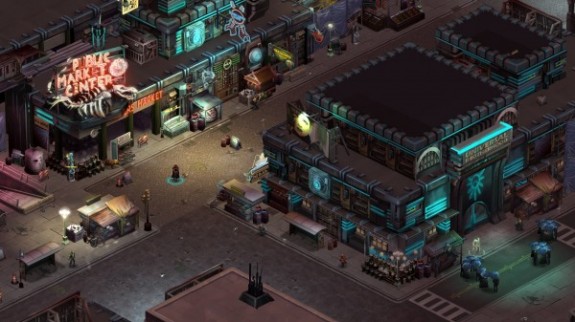 Like many cyberpunk worlds, corporations dominate the world of Shadowrun, often employing the player and their team to perform some form of corporate espionage.

The game will come with a campaign created by developer Harebrained Schemes set in future Seattle called “The Dead Man’s Switch,” though the developer hopes it’s just the first of many stories gamers will enjoy. The game will come with the Shadowrun Returns Editor which lets gamers act as Game Masters, crafting their own story and setting for other players to enjoy. Gamers can edit the entire campaign or create their own entirely from scratch.

The Shadowrun Returns Editor will come with the PC version of the game. It’s not clear if iPad and Android gamers will have the chance to create their own campaigns or play through new campaigns.

Some Kickstarter backers will gain access to the game editor two weeks before the game’s release, so gamers may have multiple campaigns to choose from on the game’s July 25 worldwide release.

The game is currently available for pre-order on Steam for $17.99, but will cost $19.99 when the game comes out. The iPad and Android versions of the game will presumably come at the same cost or slightly lower.