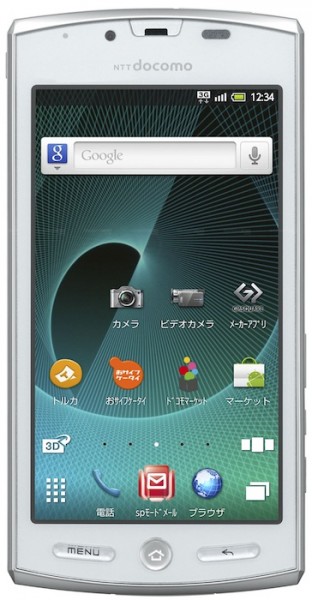 Taking on the HTC EVO 3D, Sharp will be providing Japanese residents a 3D-capable smartphone in the form of the Aquos Android phone. Curiously, though as Sharp is the maker of the EVO 3D’s qHD glasses-free 3D display, the Aquos phone actually ships sans 3D screen. It does however have the same qHD resolution display as the EVO 3D.

The Aquos SH-12C will be made for NTT DoCoMo and will launch with Android 2.3 Gingerbread out of the box.

While the display is slightly smaller than the HTC EVO 3D at 4.2-inch on the Aquos, the phone sports the same high resolution qHD display, making it more pixel-packed and a little crisper in resolution than the American 4G WiMax counterpart.

The device will be powered by a 1.4 GHz Qualcomm processor and sport 14.4 Mbps HSPA download speeds, which would theoretically make it a 4G smartphone device by the standards used by American carriers T-Mobile and AT&T. Additionally, there is an HDMI port, but it’s unclear if the HDMI connection can output 3D content to an HDTV or if it’s limited to 2D content.

For a Sharp smartphone with a 3D display, users can look at the Galapagos smartphone, which the company had stated at CES would be coming to the U.S. in the future. That device has a glasses-free 3D experience, but at a lower WVGA resolution.

The device will also compete in the same space as the LG Optimus 3D.